An Optical Silhouette of the Cassiopeia A Supernova Remnant 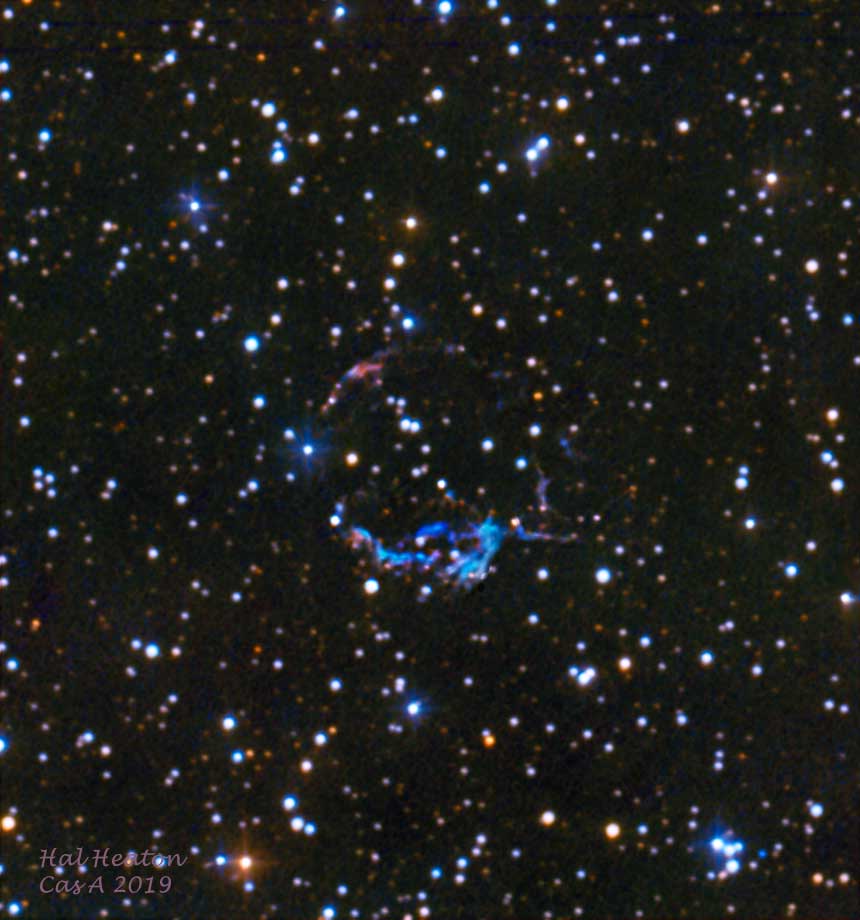 Several nights between July 26th and November 5th, 2019: the moon was up and illuminated to various percentages only during the narrowband exposures.

The Cassiopeia A supernova remnant is the strongest known extra-solar source of radio waves at frequencies above 1 GHz, and it is filled with brightly glowing X-ray emitting filaments. Less well-known, it is also silhouetted by optical emission. This emission is particularly strong in the lines of ionized sulfur and oxygen. Hydrogen emission is notably absent. The progenitor of this Type IIb supernova was most likely a 15-25 solar mass member of a binary system that exploded asymmetrically, expelling the system’s common hydrogen envelope to expose the star’s He core. That core has evolved into a highly-magnetized, slowly-rotating neutron star that is an anomalous X-ray pulsar and soft gamma ray repeater. The remnant, which first appeared in about 1680, is situated approximately 2.1 degrees south of the Galactic plane at a distance of roughly 11,000 lys. An initial 2x2-binned RGB image based on the broadband channel means was used by CCDStack to produce a synthetic luminance and new color-balanced broadband frames. The SII and OIII means were blended into these frames in Photoshop CC 2019 to produce a new RGB image with increased detail, which was LAB-color adjusted and sharpened using a two-stage high-pass filter after reshaping the stellar profiles to remove distortion caused by the lack of guiding. The finished image spans 13’.4 x 14’.3, corresponding to 42.9 x 45.8 lys; east is to the right and north is down.