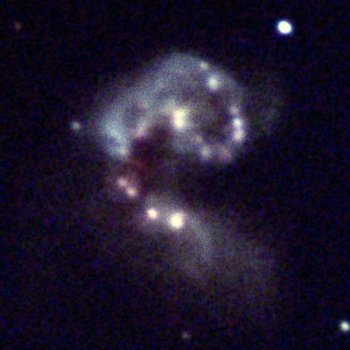 My image shows the Antennae Galaxies which have been in the process of colliding with each other for over 200 million years; before the collision began these were two spiral galaxies known individually as NGC 4038 and NGC 4039; these galaxies are located about 45 million light years from Earth. The blue regions in my image represent areas of star formation where large amounts of UV radiation have ionized the surrounding gas; when the electrons in the ionized gas recombine with protons energy is released in the form of red light photons at the H-a wavelength which is why these regions have a reddish color. The yellow regions in my image represent older stars from the original spiral galaxies.