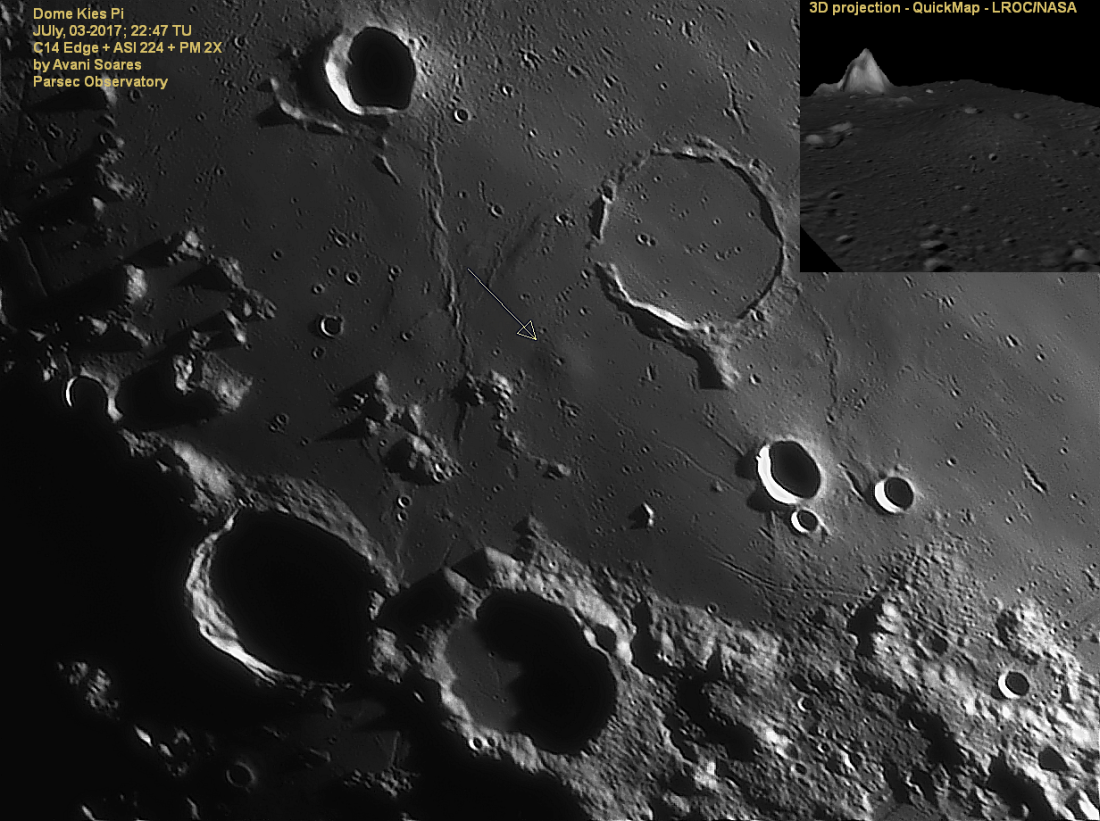 Dome Kies Pi (Lunar 60) I think that by this time of the championship I have already photographed almost all the objects of the lunar list of my good friend Chuck Wood (https://en.wikipedia.org/wiki/Lunar_100). To be honest, I never bothered to fulfill the list, I'm just taking pictures of places I consider interesting, but it would be an extremely interesting project to fulfill all 100 goals in high resolution with amateur equipment. Most of us put the observation of the deep sky in wait when the lunar glow intrudes on the dark skies. But why instead of limiting your telescope, do you not take advantage of observing the Moon itself? The crescent moon phase is a good time to familiarize yourself with one of the most evocative features of our satellite: its domes. Many of the Moon's characteristic landscapes were created by impact. Craters, rays, mountain ranges, seas and basins abound. The lunar domes are different. They formed as a result of the Moon's own internal volcanism. Similar to the shield volcanoes in Iceland and Hawaii (including Mauna Kea on the Big Island) in addition to Olympus Mons on Mars, they form when highly fluid lavas sprout through a central surface. They are almost all of low explosiveness, unlike their cousins, the most violent land strata that occupy the headlines. Like a leaf piled up after another, after the lava flows underneath the crust, a dome slowly accumulates over time, forming a broad, gently sloping mound resembling a warrior shield with a raised center and a lower ledge. Shield volcanoes may be small, such as Icelandic and lunar varieties, or large and large, such as Olympus Mons. A typical lunar dome measures between 5 and 7.5 miles (8-12 km) in diameter with a peak or boiler ~ 900 feet (~ 300 meters) in height. The slopes are very gentle with only a few degrees. More than 300 lunar domes are known, many visible in amateur telescopes with openings 3 inches up. There are two key requirements for dome boacobservation - good weathering (seeing) and observing the dome near the terminator shortly after the lunar sunrise or before sundown as was done in this photo with Dome Kies Pi. Most domes are subtle and low contrast features that become scorching with poor viewing. Low light, produces long shadows on the peaks and edges of the craters, and makes its gently sloping shapes have the best contrast. You will get more excited when you can see the boiler. When you see the dome hole, you actually see a dome for what it is: a volcano previously active on days when the moon still had an intense geological activity. About 10 km east of the Kies Crater in Mare Nubium it is easy to find Kies Pi. A dome 6 miles wide (10 km) covered by a boiler on the ridge, visible in good seeing even with a modest telescope using high power. The next time you go to observe the Moon near the terminator, do not forget to pay attention to those rounded shapes that stand easily in relation to the surrounding terrain, do not forget to remember that one day the Moon had its volcanoes active and even today it is far away to be the dead world that many believe. Source: Lunar 100 - Chuck Woods            Sky and Telescope - A Little Guide to Moon Domes - Bob King            Wikipedia - Lunar Dome Adaptation and text: Avani Soares