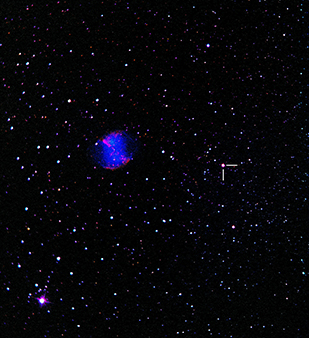 HD189733 Most of the sky lovers or the astronomers are aware of the Dumbbell nebula (M27), a planetary nebula which lies in the constellation of Vulpecula. Although, how many of these people know that next to the dumbbell nebula, just 0,3 degrees, lies a very interesting system which hosts also an exoplanet? The system is just 63 light years away from the Earth and consists of at least two stellar components and one confirmed exoplanet. The exoplanet with the name HD 189733b is the closest hot Jupiter to Earth and was discovered on October 5, 2005, by French astronomers who observed the planet transiting across the face of the star. The planet's atmosphere is scorching with a temperature of over 1000 degrees Kelvin and it was the first extrasolar planet for which a thermal map was constructed, to be detected through polarimetry and to have its overall colour determined (deep blue). Because of the fact that exoplanets are not self-luminous objects and they are also small enough compared to their mother stars, we can not observe them with amateur telescopes. However, If you want to observe the main star of the system you have to turn a telescope or binoculars to the Dumbbell nebula. Using a wide angle eye piece you can watch the nebula and the star in the same field. The star is about 7,65 mag. The photo depicts the Dumbbell nebula (planetary nebula) in the constellation of Vulcepula and with the lines is marked the star HD189733 which hosts an exoplanet, HD189733b.