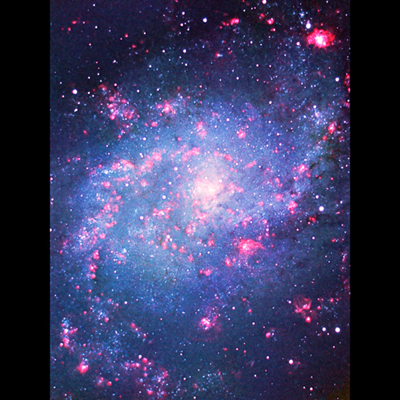 This is my image of M33, the Triangulum Galaxy. In processing the image I enhanced the Red channel with Hydrogen-Alpha channel data. Then I combined the enhanced Red channel with Green and Blue channel data to yield an L_HA-R_G_B image. This process highlights the red "H-II regions" that are interspersed throughout the spiral arms of the galaxy. These H-II regions include 200 very hot young blue stars that ionize the surrounding hydrogen atoms; when the ionized electrons recombine with their protons photons of light at the hydrogen alpha wavelength of 6563 Angstroms are emitted. That wavelength is a particular shade of red which is why these patches of light appear red in color. The most prominent of the H-II regions is the nebula NGC604 which appears in the upper right corner of my image. NGC604 measures 1,591 light years in width. It is the largest known H-II region in the entire Local Group of galaxies that extend outward from the Milky Way more than 10 million light years in every direction. The second largest H-II region is nebula NGC595 which is the flame-like red area in the lower right quadrant of my image. I captured this image with a C-11 SCT and ATIK460EX main imaging camera in 12.3 hours of integration time over multiple nights primarily in Nov 2017.