Mosaic of the The Great Orion Nebula in High Resolution 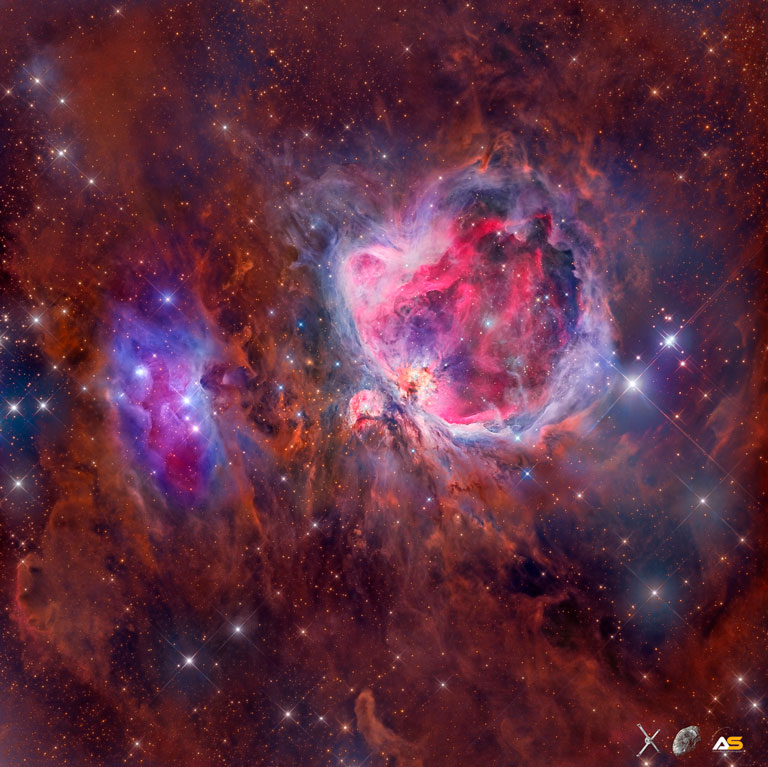 This image is the result of the efforts of three astrophotographers, Miguel Angel García Borrella, Antonio Pérez Ambite and Lluis Romero Ventura that, using different equipment from their observatories located hundreds of kilometres away have chosen a common target to render the Orion Sword area (one of the most beautiful areas of our night sky) with the highest possible resolution and signal level. Lluis and Miguel Angel have contributed with high resolution images of the Great Orion nebula and the Running man nebula and Antonio with the magnificent field surrounding both nebulas. Miguel Angel has also contributed with a higher resolution image of the Trapezium composed by very short shots with a Takahasi Mewlon 250 telescope. It should be noted that Antonio's Observatory is located 50 km north of Madrid, which means that the sky conditions are not optimal due to light pollution. For all this work four remote observatories have been involved, gathering images during more than two months, collecting the maximum possible amount of signal taking into account the poor climatology and lunations: The Astrosirius Observatory in Àger (Lleida), The Hyperion observatory in Caraquiz (Guadalajara), The SPAG Monfragüe observatory in Monfragüe (Cáceres) and one of the e-EyE observatories in Fregenal de la Sierra (Badajoz). The final image was obtained from the assembly of all six tiles, four of them with the same exposure times in all channels (L-RGB) but with two different telescopes covering the Orion and the runnning man nebula, one more to define the Trapezium cluster and its surrounding area, with Very short integration times in the Ha and RGB channels and, finally, some hundreds of wide field images using medium exposure times that helped to resolve the dust clouds that surrounds the objects that compose the Orion Sword area. The best tool of each processing program was used, and dozens of final images were processed during three months, to obtain the best resolution and colour for each one. The total amount of integrated images were 808.