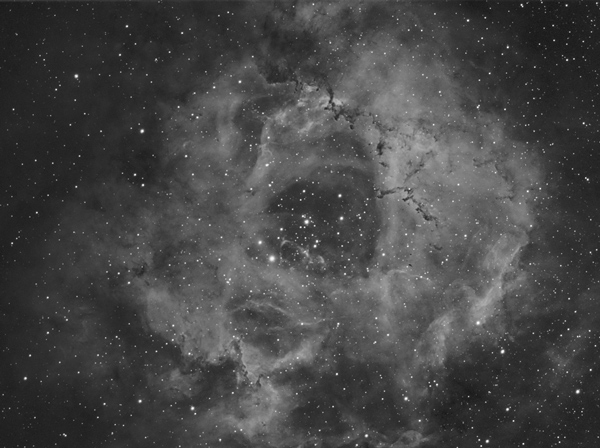 The Rosette Nebula (NGC 2237, Caldwell 49, Sh2-275) is a large HII star-forming region that lies just east of Orion in the constellation Monoceros. This large molecular cloud is comprised of several smaller parts which were discovered by three different astronomers: John Herschel (NGC 2239), Albert Marth (NGC 2238) and Lewis Swift (NGC 2237 & 2246). In 1690, John Flamsteed discovered the Rosette's central open cluster, NGC 2244. From Earth, the nebula is approximately 5000 light years distant and appears to be about 1 degree across - roughly 5 times the size of the full Moon. At an apparent magnitude of 9.0, the nebula is impossible to see with the unaided eye making it's discovery difficult.