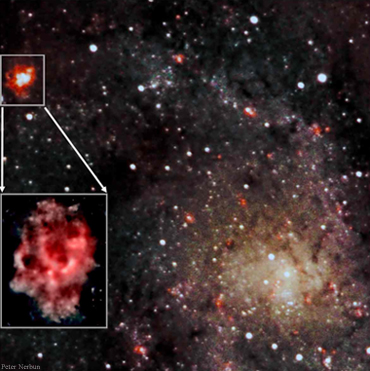 My image shows a large portion of the Triangulum Galaxy (M33) including the giant nebula NGC 604; the nebula appears as a bright red patch, a portion of which has a shape resembling that of a coffee cup handle as seen at the upper left corner of the image. I placed an enlarged narrow angle image of nebula NGC 604 in a rectangular box at the lower left corner of the image; this nebula and others throughout M33 are known as HII regions where hot stars have ionized the surrounding hydrogen atoms; when the ionized electrons recombine with their protons photons of light at the hydrogen alpha wavelength of 6563 Angstroms are emitted which is why these patches of light appear red in color.