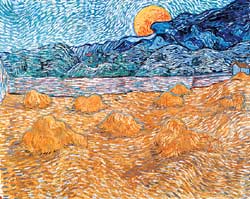 Art historians once thought this painting by Vincent van Gogh showed the setting Sun at Saint-Rémy-de-Provence, France. In the July 2003 Sky & Telescope, astronomers demonstrate that the work actually depicts the rising Moon.

In "Dating van Gogh's Moonrise," in the July 2003 issue of Sky & Telescope magazine, Donald W. Olson, a physics and astronomy professor at Southwest Texas State University, and his San Marcos colleagues Russell L. Doescher and Marilynn S. Olson reveal how they journeyed to Saint-Rémy-de-Provence, France, and solved the century-old mystery. Armed with topographic maps, aerial photographs, weather records, and letters written by van Gogh, the researchers were able to pinpoint the timing of the scene. Once thought to show the setting Sun at Saint-Rémy, it is now known to be a rendition of a rising Moon.

Throughout 2003, as special events commemorate the 150th anniversary of van Gogh's birth, there will also be an astronomical anniversary. Because of a cosmic synchronicity, the calendar dates of lunar phases in 2003 nearly repeat those of 1889. The 114 years since van Gogh's summer in Saint-Rémy correspond to six 19-year-long lunar Metonic cycles. Therefore, on this July 13th, modern observers during evening twilight will see a nearly full Moon rise in the southeast, much as it did on July 13, 1889, when van Gogh stood among the wheat stacks in a monastery field and captured the scene in his remarkable Moonrise.

The July 2003 issue of Sky & Telescope is on sale at newsstands worldwide through the end of June. Due to the great interest in "Dating van Gogh's Moonrise," we are making this article available now via our S&T Magazine Archive:

Archive subscribers may download the 1.7-megabyte PDF file for free after logging in. Nonsubscribers may purchase the PDF a la carte for $2.95. To open the PDF you will need a copy of the free Adobe Reader, which is available for PCs, Macs, and Unix-based computers.