Note to Editors/Producers: This release is accompanied by a publication-quality photo; see details below.

The full Moon on Saturday, September 21st, comes with a special name and meaning. It's the Harvest Moon. But — as you may always ask at this time of year — what is a Harvest Moon, anyway?

Lots of half-right (or worse) explanations are floating around and get reported every year as fact. So here is the 100%-right explanation — courtesy of Sky & Telescope, the world's leading astronomy magazine.

The Harvest Moon is the full Moon nearest to the date of the autumn equinox. This year they're practically on top of each other; the autumn equinox (for the Northern Hemisphere) comes just a day or so later, on the night of September 22-23.

Every full Moon, at any time of year, rises around sunset and floods the landscape with its light as soon as twilight ends. But during the next few nights after full, the Moon usually rises an average of 50 minutes later per night (as seen from temperate latitudes). So early-evening darkness soon prevails. At Harvest Moon time, however, the Moon rises only about 25 minutes later each night after full Moon (again, for temperate latitudes). This means the Moon shines brightly during early evening for several extra days running — traditionally providing welcome light just when busy farmers needed the extra work hours to get in their crops.

This was a big deal before tractors had headlights.

Of course, the extra moonlight has other uses. As the vaudeville couple Jack Norworth and Nora Bayes first sang in "The Follies of 1908,"

Why does the rising Moon behave differently at different times of the year? As the Moon moves around the Earth in its monthly orbit, we see it nearly following a line around the sky called the ecliptic. The ecliptic is tilted with respect to the eastern horizon (where the Moon rises), and this angle varies throughout the year. The weeks around the autumnal equinox are when the ecliptic makes its smallest, shallowest angle with the horizon during early evening. Therefore, at this time of year, the Moon's altitude above or below the horizon at dusk changes the least from one day to the next as the Moon makes its daily advance along the ecliptic.

Sky & Telescope is pleased to make the following photograph available to the news media. Permission is granted for one-time, nonexclusive use in print and broadcast media, as long as appropriate credit (as noted in the caption) is included. Web publication must include a link to http://SkyandTelescope.com/. 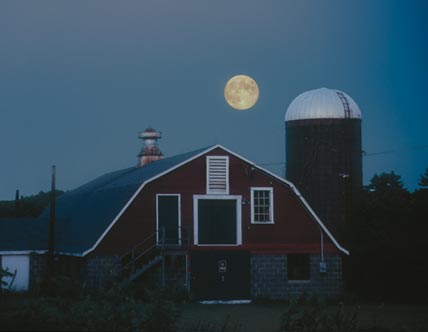 The full Moon nearest the autumn equinox — the Harvest Moon — provides farmers with some extra light on fall evenings. Click on the image to download a publication-quality TIFF (7.7 megabytes) by anonymous FTP.