Note to Editors/Producers: This release is accompanied by two high-quality illustrations; click on the smaller versions below.

Step outside as evening twilight fades, and from now through the middle of August you’ll find three planets shining low in west — one much brighter than the other two. All you’ll need is a clear sky and an open westward view about an hour after sunset. 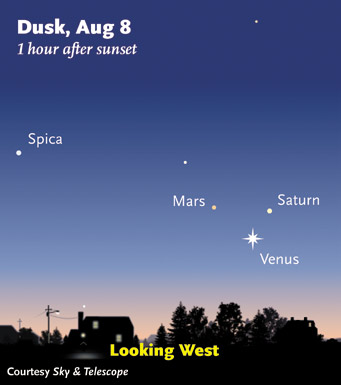 In the western sky at dusk, bright Venus lights the way to faint little Mars and Saturn.

“Venus will leap out at you,” says Alan MacRobert, a senior editor of Sky & Telescope magazine. “Saturn and Mars are fainter, so you may need to wait for the sky to darken a bit more before they glimmer into view.”

Venus is the famed “Evening Star,” the brightest celestial object in Earth’s sky after the Sun and Moon.

Saturn and Mars are only about 1% as bright. They form a more-or-less horizontal line above Venus, as wide as three or four fingers held together at arm’s length. Saturn and Mars will spend the week sliding to the right with respect to Venus, creating a planetary triangle that changes shape from day to day.

Three reasons combine to make Venus shine so much brighter than the others. It’s the closest to us, it’s the closest to the Sun so it’s illuminated more intensely, and it’s covered with brilliantly reflective white clouds. 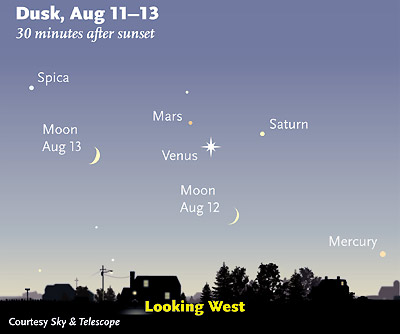 In the western sky at dusk, bright Venus lights the way to faint little Mars and Saturn. The crescent Moon joins them on August 12th and 13th. And can you spot Mercury far to their lower right? Binoculars help.

As for Mars and Saturn? They look similar in brightness for reasons that cancel out. Saturn is 35 times larger than Mars, but it’s much farther both from us and from the Sun.

The crescent Moon joins the twilight planet scene on Thursday, August 12th (when it’s below Venus), and on Friday, the 13th (when it’s left of Venus).

“Don’t miss this chance to do some easy astronomy from your backyard, balcony, or rooftop,” says Sky & Telescope editor in chief Robert Naeye. “It’s a big universe, and planets await!”