75 Years of Sky & Telescope: A Lifetime of Astronomy Coverage 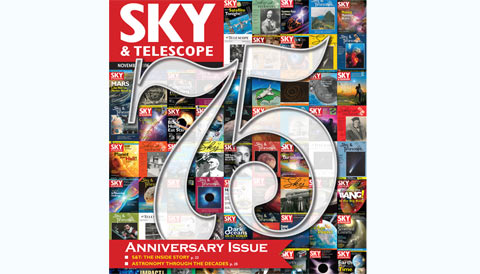 The November 2016 issue of Sky & Telescope, just off the press, celebrates the magazine’s 75 years of monthly publication since November 1941 — and recaps the 75 most exciting years for astronomy in human history.

Sky & Telescope chronicled astronomy’s progress and milestones every step along the way. Over the decades, it has become something of a "journal of record" for both professional and amateur astronomy, and especially the interface between them.

The magazine is making its eight-page timeline article of these decades available as a free PDF file: A Lifetime of Science and Skywatching.

"Many times a day I walk past every Sky & Telescope ever published," writes S&T senior editor Alan MacRobert, who has been with the magazine for 34 years. "They fill a bookcase of bound volumes outside my office. Occasionally I pull out one of the big blue books and open it. Always it's hard to close. Because I've just dropped into the broadest, most detailed single record of astronomy's developments, culture, and events across three-quarters of a century."

From the construction of the 200-inch telescope on Palomar Mountain and the construction of the world's first dedicated radio telescope in amateur's yard — through the birth of the Space Age, interplanetary exploration, and Hubble (starting when it was just a gleam in Lyman Spitzer's eye) — through today's era of precision cosmology, exoplanets, gravitational waves, and frontline amateur research — follow along with us on humankind's greatest, and still escalating, adventure.