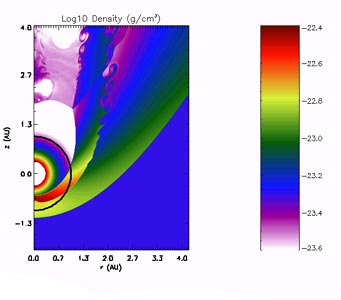 Click on image for a Windows Media File animation.

A supernova popping off near Earth could spell big trouble for our biosphere. University of Illinois astronomer Brian Fields and two colleagues used a computer to simulate what would happen if a star 30 light-years away goes supernova. The movie shows the blast wave approaching the inner solar system from the bottom of the screen. The black circle represents Earth's orbit around the Sun.

Despite the fact that the supernova is 2 million times farther from Earth than the Sun, it takes only a few days for the powerful blast wave to overwhelm and push back the solar wind — a stream of charged particles emanating from the Sun. The solar wind ends up as a highly disturbed wake behind the Sun.

With the loss of the solar wind's shielding, which normally offers our planet some measure of protection from interstellar particles, cosmic rays accelerated by the supernova bombard our atmosphere, leading to chemical reactions that deplete atmospheric ozone. Without ozone to protect life from solar ultraviolet radiation, mass extinctions would likely occur in the ocean and on land.

Fortunately, there are no stars within 30 light-years that will go supernova. But such events have certainly happened in Earth's history.