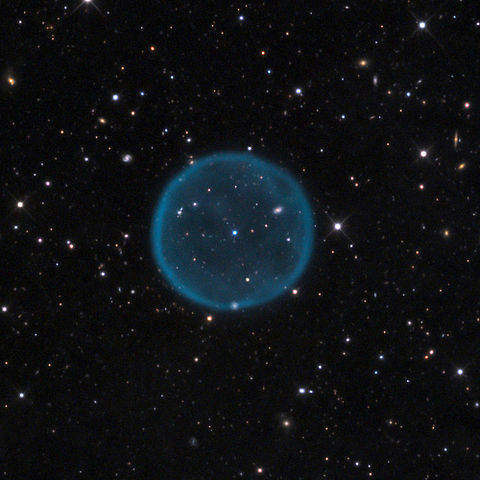 If you're looking for an observing challenge, George Abell's complete catalog of planetary nebulae has you covered.

I observed my first planetary nebula by accident. I was moving the optical tube of my new telescope up and down, back and forth, nearing epic levels of frustration as I hunted for anything that didn't look like a star. An observing novice, I didn't have a finderscope (zero-unit, red-dot finders weren't "a thing" back then), and I didn't have setting circles (big mistake). Even if I'd had setting circles, I didn't have a deep-sky atlas (yet), so I had no easy way to star hop, even if I managed to zone in on an identifiable bright star. Imagine the force of the wave of relief that hit me when I zoomed by something big and fuzzy. I was probably the happiest person on our planet when I was able to edge back to it and center it in the eyepiece. I thought I would faint from exhilaration when I figured out I was looking at the Dumbbell Nebula. Score!

Years later, my experience and improved equipment has made things easier, of course, but I still find myself thwarted by planetary nebulae on occasion. Many, many planetaries appear stellar in the eyepiece, and I now know that I'm not the only one who has difficulty detecting their particular hue of cyan. Knowing what to expect (and how to get there) makes the chase more fun — I don't need a Hubble Space Telescope view to feel like a winner.

If you're ready to join the hunt, I recommend starting with the list of "13 favorite" planetary nebulae from the Abell catalog as described by Steve Gottlieb in our July issue. This would be a good time to pick up an O III filter if you don't have one already — you'll appreciate the contrast boot. Steve used an 18-inch reflector for most of his observations. I will add: most of these are within reach of my 10-inch reflector, but not in my backyard. Dark skies are key!

Once you've worked your way through the initial list, you might want to take a crack at the larger Abell catalog. Steve has provided the catalog number, position, size, visual magnitude, magnitude of the central star, and distance for the entire catalog. You can download the catalog here as an Excel file.

The distances given are from a paper published by David Frew (University of Hong Kong), Quentin Parker (Macquarie University), and Ivan Bojičić (Australian Astronomical Observatory) in the Monthly Notices of the Royal Astronomical Society in 2015 (https://arxiv.org/abs/1504.01534).

Before you head outside, check out these useful links from Steve as well as other observers: