Adaptive Optics: Before and After 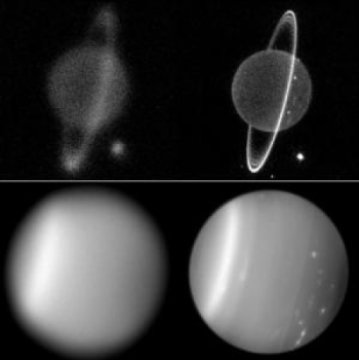 In the May 2016 issue of Sky & Telescope, author Shannon Hall covers the past, present, and future of adaptive optics (AO), the technology that has allowed astronomers to conquer the tempestuous atmosphere.

The effect of adaptive optics is immediately visible (and astounding), so we're including here a full gallery of images that demonstrate the before and after, including several images that we didn't have room for in the magazine.

This simple animation shows how turning on the AO system at the Keck Observatory in Hawai'i improves visibility toward our galaxy's center:

Though adaptive optics can be done with natural guide stars (i.e., by utilizing a nearby bright star in the sky), it's not always feasible, especially over a wide field of view. When bright stars are not available, observatories implement laser guide stars, a bright artificial star created by shining a laser beam into the sky. The image below shows the improvement from a natural guide star image of the galactic center (right) with a laser guide star image of the same field (left).

A similarly themed animation shows a view of our galaxy's central 0.5 arcseconds. The left panel shows the view with current AO technology, the central panel shows the view with next-gen AO, which will include multiple laser-generated guide stars. The right panel demonstrates the potential of the European Extremely Large Telescope, which will feature a beast of a 39-meter primary mirror.

An early AO system at Palomar Observatory sussed out a pair of stars in the IW Tau binary system with a separation of 0.3 arcseconds.

AO continued to improve, as the figure below shows. The The AO-enabled Palomar Observatory discovered the first brown dwarf, Gliese 229B, tucked within the glare of its companion star (left). Hubble followed up a year later (center) to help pin down its orbit. After a decade, an image captured by the Near-Infrared Coronagraph and AO system on the Gemini North telescope (right) shows how far the technology has come.

(Because this last image has a slightly larger field of view, the brown dwarf appears closer to its host star. This image is also a difference image, subtracting one image in the methane emission band and one outside that band, which helps remove the companion star and gives it the zebra-stripe appearance.)

AO systems can be turned closer to home too. Features in Uranus's atmosphere such as storms and banding sharpened dramatically once AO was enabled on the Keck Observatory. The image below was taken in 2004 from the Keck II telescope.

Here's another example, this time with Neptune as the subject:

Though many observatories use custom-built sodium lasers, green-tinted Rayleigh lasers are sometimes used instead due to their commercial availability. Watch the ARGOS laser guide star in action at the Large Binocular Telescope: