Asteroid 22410 Grinspoon: My Rock of Ages 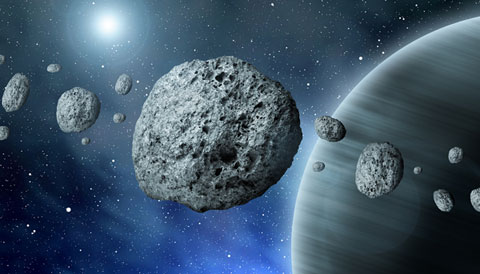 On being immortalized far out in the asteroid belt.

When I give public lectures I often say that somewhere out there is an asteroid with Earth’s name on it. Now I can add that one has my name on it, too.

Recently I learned about the naming of asteroid 22410 Grinspoon. It’s pretty cool to have a space rock a few kilometers wide named after me. But the truth is, millions of these “minor planets” exist, more than 20,000 of them with people’s names attached. It’s not like having an eponymous planet, or even an eponymous feature on a planet. For those, the rules are clear: To earn the honor of having, say, a crater bear your surname, you first have to die, which would seem to take the fun out of it.

Upon hearing the news, I immediately thought of Antoine de Saint-Exupéry’s Little Prince, living on his little asteroid called B-612 and pulling up the baobab trees that threaten to overrun it. Today there’s an organization, called the B612 Foundation, dedicated to protecting our planet against future asteroid impacts. Indeed, right after emailing family members to share my delight, I checked my asteroid’s orbital parameters. What if it was one of the 1,786 potentially hazardous objects detected so far (as of last March)? I could just see the headline: “Grinspoon threatens Earth in 2042!”

What I found is that it has a semimajor axis, or average distance from the Sun, of 2.57 a.u. That’s a little over two and a half times the distance from Earth to our star. It has an eccentricity of 0.0232, making its orbit almost circular, and an inclination of 3.5°, which takes it slightly out of the ecliptic plane. So it’s a fairly ordinary main-belt asteroid.

But it’s part of a vast reservoir of rocks close enough to Jupiter’s orbit that the big planet sometimes perturbs a fragment into a more hazardous orbit. In fact, my asteroid orbits just outside of a large gap in the main belt at about 2.5 a.u. that our largest planet has already cleared out. Anything in that gap orbits three times for every one Jupiter year, and the cumulative gravitational effect of this “3:1 resonance” is to heave those objects elsewhere in the solar system. I checked with an asteroid expert friend, who told me, “You’re just outside the 3:1 resonance, but far enough from it that you probably won’t kill us anytime soon.” Phew.

So, asteroid Grinspoon is no danger to anyone, and probably not of much interest, either — except as one tiny part of a huge swarm that collectively contains important clues to planetary origins and in the future may provide raw materials for all kinds of deep-space manufacturing and mischief. Understanding more about these space outcasts and how to alter their orbits may save our hides one day.

So, future humans, it’s okay with me if you grind up “my” asteroid for minerals, use it for terraforming another planet (please request permission from the locals first), hollow it out to live inside it, or even plant a forest of genetically modified, radiation-hardened baobab trees on it.

Naming things can provide an illusion of immortality, but all of this is temporary. Whatever happens to 22410 Grinspoon, something else will end up using its atoms. As the poet Joy Harjo wrote, “I know we will live forever, as dust or breath in the face of stars, in the shifting pattern of winds.”