Balloon Astronomy: From Launch to Landing 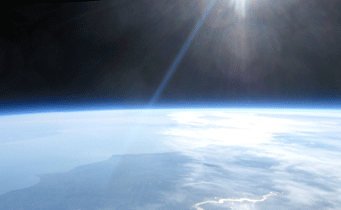 The River Thames, a hallmark of the southern English landscape, gleams here in one of the 2,800 photos captured by the homemade "space balloon."

Balloon astronomy is really taking off, writes Laura Fissel (NRAO) in the February 2018 issue of Sky & Telescope. She should know — as a member of the adventure-prone Balloon-borne Large Aperture Submillimeter Telescope (BLAST) team, she has been involved in multiple balloon telescope launches, part of her effort to study magnetic fields and star formation in our galaxy. (Follow the BLAST team's progress at @BLAST_TNG.)

As Fissel writes in her feature article, next-gen technologies continue to advance the field to the point where Hubble-quality images will no longer require a trip to space. Here, you can watch astronomical balloons in action: see launches from the ground, take in the stunning views from the balloon itself via GoPro cameras, and watch NASA's short documentary on how the space agency is conquering the stratosphere.

BLAST-Pol, a balloon-borne submillimeter-wave telescope designed to study star formation in our galaxy, launched from Willy Field, near McMurdo Station, Antarctica, in 2012:

How does a gondola land from 120,000 feet? This view shows the parachute (red) that will slow the gondola's fall unfolding shortly after separation from the balloon (white):

Take a journey with Spider, a telescope searching for the echoes of inflation in the cosmic microwave background, 110,000 feet above Antarctica:

Finally, view NASA's 20-minute documentary on astronomy from the stratosphere: