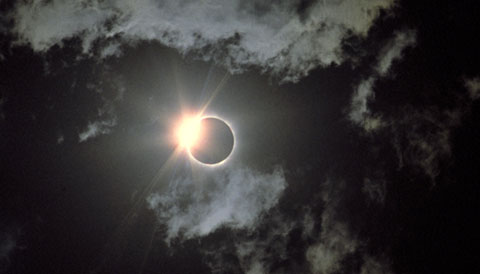 A total solar eclipse offers the most spectacular of jewels.

Most subscribers to Sky & Telescope will receive this issue in late July, well before August 21st’s total eclipse of the Sun, so I want to continue the discussion of total eclipses I began last month. I’ll conclude with an eclipse that brought me the most staggering moment I’ve ever had in a lifetime of observational astronomy.

Can you observe the F-corona? What overall shape will the corona take during the August 21st eclipse? The ultimate visible extension of the corona is not the gases of the Sun that glow on their own, but the part of the corona formed by dust particles that reflect light from the Sun out to many million miles. In fact, this “F-corona” is really the beginning of a phenomenon that stretches all the way to Earth’s orbit and beyond — the zodiacal light. But we can only pick up the zodiacal light starting many degrees away from the Sun as twilight starts to fade away.

I’m familiar with only two observers who have knowingly seen the F-corona extending along the ecliptic during a total eclipse. Steve Albers did so with the naked eye. Robert Victor, columnist for Sky & Telescope in the 1970s and 1980s, traced the corona out to 5° with binoculars. However, both made these observations during the extremely long 1991 total eclipse of the Sun — so perhaps that gave their eyes more time to become dark-adapted.

The diamond ring of rings. The first or final piece of solar photosphere shining through the deepest valley on the Moon’s edge creates, with the ring band of the inner corona, the most spectacular of all eclipse phenomena: the diamond ring. This diamond is truly brighter than all of Earth’s diamonds combined. But during the eclipse of February 26, 1979, in Manitoba, I got to see a diamond wonder beyond all wonders.

Thin clouds had created a “cloud-corona” around the Sun before totality. The cloud-corona that most skywatchers have noticed on occasion occurs when clouds in front of the Moon produce a disk of blue or green bordered by a red ring around the Moon. The cloud-corona is an interference pattern formed by water droplets — or, rarely, ice needles — that are similar in size to the wavelengths of visible light.

Back to the 1979 eclipse: As totality began, I saw the dazzle of three Baily’s beads — but no diamond ring. After 2 minutes and 50 seconds shouts of “It’s coming back!” rang out.And then I heard the loudest yells and cries of all: The most briliant “star” any of us had ever seen had appeared at the edge of the Sun. The diamond brightened and hung, still starlike, second after second.

What happened next I’ve described best in my book Wonders of the Sky: “As the diamond brightened, two perfect rings of color came into view, centered upon it. It was a two-ringed cloud-corona, but never had I seen an example like this, for the smallness and incredible brightness of the diamond made the two rings also the smallest, sharpest, and most intensely deep purple-red that I have ever seen.”

But most stunning of all was the positioning of the rings. “Since this phenomenon was caused by ice needles, the inner ring cut directly in front of the Moon, with the outer, exactly twice the radius of the first, encircling all. And the band of the diamond (ring), the inner corona, was still clearly visible and thus interlocked with the inner cloud-corona ring.” This was the most staggering beauty I’ve seen in all my years of skywatching.