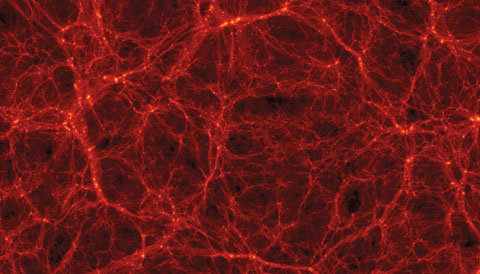 In the February 2015 issue of Sky & Telescope, author Marcus Woo walks readers through the science of . . . nothing.

Empty space makes up most of the universe by volume, and though most astronomers are drawn to light, it's in these blackest of voids where we can potentially learn the most about dark energy, dark matter, and the growth of galaxies.

The sheer vastness of cosmic voids makes them difficult to comprehend. But animations and simulations can help the human mind conceive of expanses several hundred million light-years across, even if the only we can understand such emptiness is by focusing on its populated edges. Fly through the universe — theoretical and observed — in the simulations and animations below.

The 400,000 galaxies shown in this animation based on the Sloan Digital Sky Survey provide some perspective: fly through clusters and walls of galaxies, and the voids that surround them.

Large-scale simulations, such as the Bolshoi and Illustris simulations, are ultimately designed to compare results with galaxy surveys such as SDSS. The Illustris simulation shown below demonstrates the evolution of a galaxy cluster, incorporating the effects of radiation (from gas-guzzling black holes and forming stars) on cosmic evolution. But keep an eye to the negative space and you'll witness the voids evolve as well.

Most simulations focus on galaxy and galaxy cluster evolution, but the rare astronomers who focus on the lack of light model cosmic voids, tracking their evolution over time. On a smaller scale than the above Illustris simulation, Erwin Platen (University of Groningen, The Netherlands) simulated the growth of a single void in a universe with standard cosmology. The simulation frames shown below demonstrate how matter flows toward the edge of the void over cosmological time, drawn away from the center under the force of gravity.