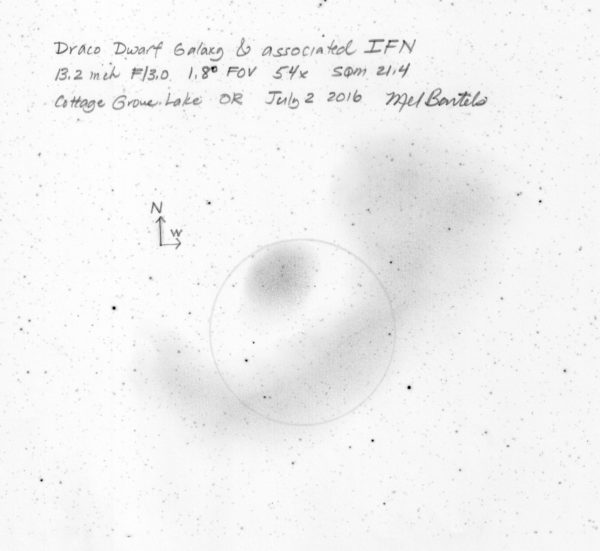 Galactic cirrus (clouds of interstellar dust) is challenging to observe, but Mel Bartels shows us how in the April 2019 issue of the magazine. Accompanying his explanations with detailed hand-drawn sketches, Mel takes us on a tour of the ghostly cirrus as it arcs across the sky. We visit Ursa Major, Leo, Coma Berenices, and Canes Venatici. Along the way we also stop in at familiar galaxies such as M81, M82, and M101 in Ursa Major, as well as M95, M96, and M105 in Leo, just to name a few. Mel also treats us to three views of galactic cirrus near the Whirlpool Galaxy (M51) taken with telescopes of different aperture — it's interesting to see how the smallest-aperture telescope yields greater detail on the extent of the galactic cirrus, while the two larger-aperture telescopes provide more detail on the galaxy itself.

Dwarf galaxies are interesting targets when it comes to galactic cirrus since they're approximately the same brightness, although Mel notes that to his eye there is a difference in hue. Mel goes on to say that he sometimes spots the cirrus before he detects the galaxy — in fact, he'll often use the cirrus to guide his way to the galaxy instead of star-hopping, as is the case with the Draco Dwarf Galaxy. A patch of sky that Mel finds particularly pleasing is that which contains the dwarf galaxy Leo I, the star Regulus, and the shimmering cirrus. Sketches of the galactic cirrus and the two dwarf galaxies are reproduced here.

Can you find galactic cirrus in your scope?