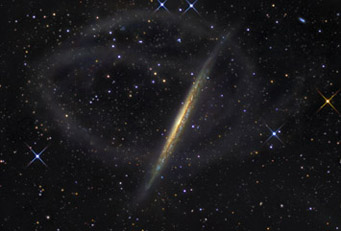 Using off -the-shelf equipment, GaBany was a key team member in the discovery of galaxy star streams surrounding NGC 5907.

Astronomers investigating the origin and evolution of galaxies have discovered clues to these fundamental studies with the help of an unlikely source: backyard astrophotographers.

GaBany took a few minutes out of his busy schedule hosting the 2008 Advanced Imaging Conference in San Jose, CA, to talk to about his important role in making these ground-breaking discoveries with S&T editor and fellow astro-imager Sean Walker. Download the interview as a 3.5-MB MP3 file (10 minutes).