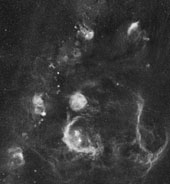 In the April 2009 issue, beginning with the photographic spread on pages 66-67, Sean Walker (S&T’s Imaging editor) and I describe our efforts using commercially available equipment and image-processing software to create a huge mosaic covering nearly 10% of the sky.

As we noted in the story, the mosaic is not our yet-to-be-completed “final” image, but rather the intermediate result of experiments to map the extent of an enormous deep-sky feature know as the Orion-Eridanus Superbubble that I can record from my suburban-Boston location. We're also experimenting with the best way to create a mosaic covering such a large section of sky. This is a particularly daunting task, and Sean has as much time invested in processing the individual frames and stitching them together as I have in making the 40+ hours of exposures. 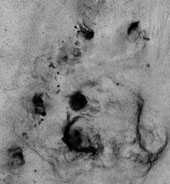 Sean began with a technique used by others, where the final frames of the mosaic were matched to and pasted over a base image made with a wide-angle lens. But our field was so large that even the base image was a mosaic of two frames. The process grew increasingly more complex when frames were added that extended beyond the base image. It would certainly be easier to start with a view that exceeds the area of the final mosaic, and currently we’re planning to make a new base using four frames that each measure 42° on a side, yielding a final field almost 80° square.

We’re also making new “final” frames for the mosaic that record deeper and have more resolution than those used for the pictures in the magazine. Experiments are still ongoing, but we’ve had some very good results with an Apogee Alta U16M CCD camera, Astrodon 3-nm hydrogen-alpha filter, and vintage 150-mm f/2.8 Xenotar lens stopped to f/4. The latter was made by Schneider-Kreuznach, and was one of the “fastest” lenses used in the days of press photography with 4x5 cameras. We’ve also made some tests with a Hasselblad 110-mm f/2 lens stopped to f/4. 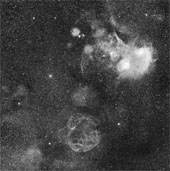 As mentioned in the S&T story, we’re making available here half-scale files of the original mosaic. One is a 3-megabyte positive image with the contrast set the same as for the view in the magazine. The other is a 4-megabyte negative image that’s been stretched to emphasize the wispy veil of nebulosity covering the whole region (at the expense of blowing out details in the nebulosity’s brightest regions).

Also included here are two images made with the 150-mm Xenotar lens. The “Auriga” file covers a 14°-square region shown at the top center of the mosaic, and includes the well-know Flaming Star Nebula (IC 405) and Simeis 147 on the Auriga-Taurus border. The three prominent star clusters visible in the central portion of the field are, from left to right, M37, M36, and M38. 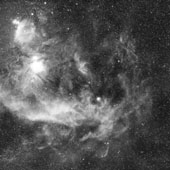 The “Rigel” file covers a similar-size field roughly centered on that star in Orion and shows the southern extension of Barnard’s Loop, as well as the Orion and Horsehead Nebulae. Look closely at that image and you’ll see one of the disadvantages of living under the flight paths for two busy airports, including Boston’s Logan International.