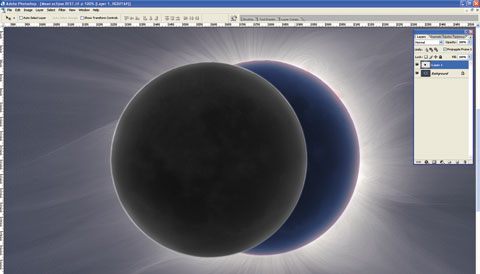 If you want the best results from your eclipse photos, you'll need to do some processing. Equipment Editor Sean Walker walks us through processing photos from the 2010 Easter Island eclipse.

While capturing bracketed exposures of a total solar eclipse has gotten easier thanks to features available on many new DSLR cameras, processing the results hasn’t changed much since the article I wrote in the June 2009 issue, page 64. Whether your intention is to faithfully depict the visual appearance of the eclipse or to reveal as much detail as possible within the solar corona, high-dynamic-range (HDR) processing techniques are still the way to go. Most everything discussed in my earlier article remains relevant, though if you shoot your eclipse exposures without a tracking mount, you’ll need an additional software program to register your images before combining them. For the image of the 2010 Easter Island eclipse in this article, I worked with Dennis di Cicco’s four groups of nine bracketed exposures. I used MaxIm DL 5.08 to register the corona in each exposure using two stars that appear near the Sun and were detectable even in the brief,  1/500-second exposures — a testament to the sensitivity of the Nikon D700 and the sharp focus Dennis achieved with the Tele Vue TV-85 objective and Hotech field flattener. Without having field stars to register each frame, image shift caused by a fixed telescope during the exposure sequence reduces your ability to precisely combine the exposures into a single HDR result. After aligning and cropping each of the 36 exposures, I used Photomatix Pro to combine them. I also made sure to save a copy of this “raw” HDR file in case I learned new processing tricks in the future. Next, I moved on to the program’s Tone Mapping section. As HDR processing has matured, Photomatix Pro has kept pace with new updates. Now on version 4.1, Photomatix Pro includes new tone-mapping presets that didn’t exist in 2009, and it also allows you to save your own custom settings so you can duplicate your process on many images. The parent company, HDRsoft, offers a basic version of the software called Photomatix Essentials for $39 that performs many of the same functions. You can check the company’s website, hdrsoft.com, to compare both programs and decide which one best suits your needs.

Using the latest version, I combined the 36 frames essentially the same way as I described in the 2009 article. But due to the greater length of totality, the Moon moved noticeably relative to the corona between the first and last images in the sequence, blurring its image in the HDR stack. I easily fixed this in Adobe Photoshop by using a single HDR stack of just one 9-image sequence and blending the central portion of it into my full stack. This blending layer is also useful for reducing the HDR program’s propensity to excessively brighten the closest part of the corona adjacent to the lunar disk. I opened both sets of stacked images (one made with all 36 exposures, and another with just one bracketed set) in Photoshop. Though Photomatix is very good at combining the bracketed images to reveal the corona’s innermost details as well as its outer extent in the same image, it doesn’t render the background color accurately. So my first task in Photoshop was to adjust the curves palette to brighten the background sky of the full stack and add a bit of blue to it, without affecting the inner corona. Next, I experimented with sharpening to bring out additional details within the corona. I prefer to sharpen using High-Pass Filter layers that were detailed in the 2009 article, followed by some noise reduction near the edges of the image. Once I was satisfied with the sharpness, I worked on the Moon’s appearance. I started by selecting the 9-image HDR stack, copying it, and pasting it over the full 36-image stack. To get the best of both images, I simply used the Elliptical Marquee Tool with feathering set to about 5 pixels, and selected the area of the photo that includes the Moon, plus a little bit of the inner corona. Next, I copied this selection and pasted it onto the same location of the image, and then deleted the layer that included the entire 9-image HDR stack. I was left with two layers, the entire stack on the bottom, followed by the 9- image stacked Moon layer on top.

Here I adjusted the Moon layer with the Curves palette again, this time to darken the Moon and inner corona. One thing I couldn’t fix in curves is the unnaturally bluish Moon and its bright rim. This is mostly an artifact of the HDR process. An easy way to compensate for this is to open the Channels window and click on the green channel. Again using the Elliptical Marquee Tool, I selected the Moon, but this time I set the feathering to 2 pixels and tried to select as close to the lunar limb as possible. When I was pleased with the selection, I copied it. I then clicked on the RGB channel in the Channels window to select all channels, and pasted the green Moon channel into the image. This gave the Moon a neutral gray appearance, which I found less distracting. I could then brighten or darken the Moon layer independent of the inner or the outer corona layers, or use the burn tool to further darken the lunar limb if necessary. The “before” and “after” Moons are shown in the illustration below. While the resulting photograph is different from how the eye sees the corona, images such as this allow us to see extremely subtle tonal variations, as well as fainter stars than weren’t noted visually during the event.