Inside the April 2015 Issue 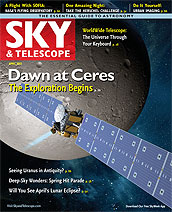 April Pilgrimages: To Ceres, Deep-Sky Wonders, and Beyond!

"Whan that Aprille with his shoures soote..." April is the month when heading out at night gets a little less chilly and a lot more fun. So it's the perfect month, as Geoffrey Chaucer wrote, to go on pilgrimages. Join S&T contributing editor Emily Lakdawalla as she guides us through the journey of the Dawn spacecraft to the largest asteroid, Ceres. Then follow the historical footprints of William and Caroline Herschel and relive their legendary night of discovery: on April 11, 1785, exactly 230 years ago, they recorded 74 new galaxies, nebulae, and star clusters. Then take that history and science with you (and the magazine too!) as you head outdoors. April's evenings feature five bright planets and deep-sky jewels aplenty, perfect for after-dinner expeditions through the cosmos.

Dawn Arrives at Ceres
NASA's spacecraft enters into orbit around the largest asteroid in the main belt.
By Emily Lakdawalla

WorldWide Telescope
Take a virtual and interactive tour of the universe.
By Alyssa Goodman & Curtis Wong

Astronomy Aboard SOFIA
After two decades of trial and tinkering, the Stratospheric Observatory for Infrared Astronomy (SOFIA) is finally flying high.
By J. Kelly Beatty

Backyard DSLR Imaging
Get the most out of your deep-sky imaging from any location with these helpful tips.
By Richard Jakiel

The Herschel Sprint by JR
Experience the Herschels' "Night of Discovery" for yourself.

How to Use the WorldWide Telescope by Monica Young
Learn how this interactive software can be used to research and educate.

Follow the Dawn Spacecraft
Keep up to date on Dawn's visit to Ceres by following posts from chief engineer Marc Raymond.

Lunar Librations by Sean Walker
Librations and other lunar data for April 2015.

The Pilgrim's Way
Venus and Jupiter lead us on a journey through spring skies.
By Fred Schaaf

A Barely Total Lunar Eclipse
On the morning of April 4th, the Moon skims just inside Earth's umbra.
By Alan MacRobert

Spring's Hit Parade
A blood-red gem and a misty bird of prey top the charts.
By Sue French