Inside the August 2017 Issue 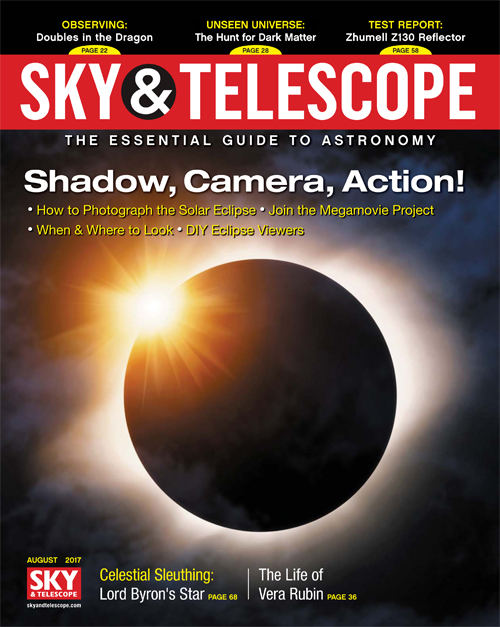 Certainly there are many "dark" phenomena to explore in the world of astronomy. On August 21st, darkness will cover some parts of the US in the middle of the day as the Moon casts its shadow on Earth — and we'll give you tips to get the best photos. Learn about what form dark matter may take — be it hot or cold. Discover the story of Vera Rubin, the "mother of dark matter". Uncover the mystery of Lord Byron's "star", and also find a test report on a tabletop Dob, an exploration of resolution, lighting, and actual changes to lunar features, a DIY solar projection guide, and more, in the August 2017 issue of Sky & Telescope.

How To Shoot a Solar Eclipse
A little advance planning can help make your pictures memorable.
By Dennis di Cicco

Eyes of the Dragon
Look the fiery beast in the face as you track down these binocular doubles in Draco.
By Mathew Wedel

In the Dark About Dark Matter
Astronomers' favorite candidate for the universe's invisible matter is running out of place to hide. Maybe we should be looking for something else.
By Leonidas Moustakas

Vera Rubin's Universe
By looking at things others didn't think were interesting, the astronomer often labeled the "mother of dark matter" forever changed our picture of the cosmos.
By Ashley Yeager

"The Moon Is Up... A Single Star Is at Her Side"
Lord Byron's famous evening yields up its mystery: He wrote what he saw.
By Donald W. Olson

Cassini Playlist
Listen to the debris Cassini encountered as it dove through Saturn's rings.

Solar Eclipse Near You?
Use this interactive map to find the exact time the solar eclipse will (or won't!) begin near you.

The Solar Eclipse for the Rest of Us
Totality watchers get the best show, but a far greater number of people will be in partial-only territory. Here's how to make the most of it.
By Alan MacRobert

Changes Real and (Mostly) Imagined
Even renowned lunar observers have sometimes been fooled by tricks of lighting and resolution
By Charles A. Wood

Overlooked Wonders of Summer
Take some time to explore these lesser-known deep-sky sights.
By Sue French