Inside the December 2006 Issue 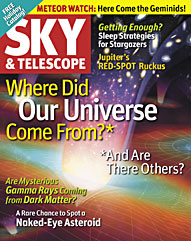 Spectrum
What's in the Sky Tonight? By Richard Tresch Fienberg

Spotlight On . . . Stardust in the Large Magellanic Cloud
A new infrared image from NASA's Spitzer Space Telescope highlights the role played by dust in the life cycles of stars. By Richard Tresch Fienberg

Where Did It All Come From?
Cosmologists are closing in on the question of what gave the Big Bang its bang.
By Anthony Aguirre

Messages from the Dark Side?
Have astronomers detected dark matter annihilating itself? By Govert Schilling

Sleep and the Amateur Astronomer
A professional astronomer and a photobiochemist share their tips for staying awake while observing late at night — and for getting restful sleep when your head hits the pillow. By Daniel B.Caton and Joan E. Roberts

read now
Rambling Through the Skies: Raising Hell
Throughout the centuries, Hades has run hot and cold. By E. C. Krupp

Celestial Calendar
The Geminids: Best Meteors of the Year? By Alan MacRobert

Deep-Sky Wonders
A Whale of a Tale By Sue French

S&T Test Report:
The Bigha StarSeeker
Conceptually simple, an observing chair for binoculars requires a lot of subtle engineering. We test one that makes the grade in more ways than one. By Dennis di Cicco

S&T Test Report:
Mira AL: Powerful Introduction to Image Processing and Analysis
With its attractive price and impressive capabilities, this software is an ideal gateway to professional-quality imaging. By Joe Heafner

Books & Beyond
Ten Years of Life on Mars, Beyond the Multiverse, and more . . .

Star Trails
What is a Planet? By David H. Levy

Hobby Q&A
When can we expect the next transit or occultation of one planet by another? Is it better to store a telescope in a climate-controlled house or a garage? and more . . .