Inside the December 2018 Issue 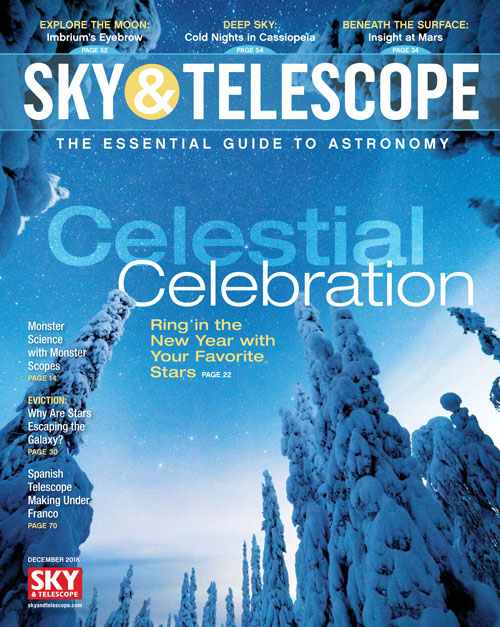 In the December 2018 issue of Sky & Telescope, we have something for every astronomical enthusiast. Learn about the science the monster scopes from last month will be able to accomplish. Will we be at the limit of Earth-based optical and near-infrared astronomy? Tour 15 stars in the sky this New Year's. Discover where scientists think the stars escaping the galaxy come from. The Insight mission may not be a Mars rover, but it will reveal the thickness and characteristics of Mars's interior layers, determine how quickly Martian heat is lost to space, and measure marsquakes. Plus, discover what amateur astronomy was like in Spain under Franco's dictatorship. Learn how to get the best images you can from your backyard. Check out our observing picks for the month, spot asteroid 6 Hebe, explore whether Mare Frigoris is part of the Imbrium impact basin, and go on a deep sky tour in Cassiopeia! Read about one astronomer's sundial wall, complete with markings from the 2017 total solar eclipse. We also test an online telescope service with a planetary photography focus. Enjoy these and other stories in the December 2018 issue of Sky & Telescope.

Monster Science
The next generation of superscopes will have universe-size science projects.
By Govert Schilling

New Year’s Eve Celestial Celebration
Step outside this New Year’s Eve and join the author on an excursion through the stars.
By Scott Levine

The Fastest Stars Escaping the Galaxy
Exploding white dwarfs can doom their companions to roam intergalactic space.
By Ken Croswell

Mars: The Inside Story
Geophysicists hope NASA’s Insight lander will reveal what goes on deep in the Red Planet’s interior.
By Emily Lakdawalla

Getting the Best from Your Backyard
Imaging from a suburban backyard can be rewarding, even under light-polluted skies.
By Jonathan Talbot

Arecibo Observatory Emerges from Storm with $6M Upgrade
Read the original article in full about Arecibo's recovery after Hurricane Maria.

AAS Opens Membership to Amateurs
The American Astronomical Society returns to its roots and once again offers membership to both professional and amateur astronomers. Learn more and join!

Rains of Fire
Meteor showers elicit wonder in one and all.
By Fred Schaaf

The Frosty Sky
Bundle up and go out into the cold. Your queen awaits.
By Sue French

When will the current issue (December 2018) become available on nxtbook.com?

Did you gain access to December 2018 issue on nxtbook.com?

Mmmmmm,
Apparently, we will have to purchase it if we want a digital copy.

Hello apologies that I didn't see this earlier. You should have received an email several months ago explaining our change of digital issue distribution providers from nxtbook to Zinio. For a few issues, we served the issue to both platforms, but have completely transitioned over to Zinio at this time. You should have received an email from Zinio. If you did not, kindly contact [email protected] If you have other challenges regarding your subscription, email [email protected]

I have a subscription until the middle of next year so hope that this is honoured and I will be able to access the magazine via the Zinio site. Richard-Dodson, where did you find the information that we have to purchase individual copies?

Ok. There has to be a real good reason for what S&T doing. To me its a REAL BAD MOVE to get away from Digital PDF downloads. I understand that some people have taken liberties on sending copies to none subscribers. I thank you people for hosing the rest of us non-participants in your illegal action. Know because of you we are all screwed. Way to go …. Trooper!!