Inside the February 2017 Issue 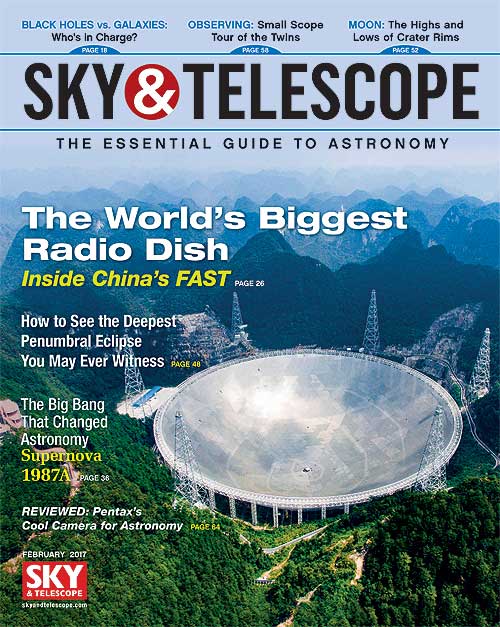 Thirty years ago, astronomers first caught sight of the supernova now known as 1987A. A star in the Large Magellanic Cloud, the massive dwarf galaxy near the Milky Way, had erupted to become the brightest supernova seen since the Kepler supernova in 1604. Since then, astronomers have had unprecedented access to the life and times of an exploded star, and as Robert Kirshner chronicles in his feature article, 1987A continues to hold surprises. Also in these pages, S&T Science Editor Camille Carlisle discusses black hole evolution and the effect that supermassive black holes may — or may not — have on their host galaxies. Read on to participate vicariously in an observing adventure to Dry Tortugas, then prepare for February's deep penumbral eclipse, and explore Jupiter, as well as Lepus, the Rabbit. Clear skies!

Anatomy of a Black Hole
By the Editors of Sky & Telescope

Of Black Holes & Galaxies
How much influence do supermassive black holes have on their galaxies, or vice versa?
By Camille M. Carlisle

Mega-Eye on the Sky
Completed last September, China's FAST has eclipsed Arecibo as the largest single-dish radio telescope in the world.
By Renjiang Xie

Imaging Adventure: Dry Tortugas
Here's how to shoot from the darkest skies in the U.S. Southeast. (Don't forget the drinking water.)
By Richard S. Wright, Jr.

The Supernova of a Lifetime
Thirty years later, Supernova 1987A continues to develop and surprise.
By Robert P. Kirshner

Full Story: Two Novae in Sagittarius
Read about the newest flaring stars that amateurs discovered in the Sagittarius constellation.

Find Out More: Dione's Subsurface Ocean
Get all the details on the ocean that might lie beneath another of Saturn's moons.

A Deep Penumbral Lunar Eclipse
Watch the Moon flirt with Earth's shadow on the evening of February 10th.
By Alan MacRobert

How are Crater Rims Made?
The circular rim crests that surround big lunar impacts tell interesting stories.
By Charles A. Wood

It's All About the Ears
A few short hops lead from a carbon star to a planetary nebula and a pair of interacting galaxies, all within the constellation Lepus, the Hare.
By Sue French