Inside the February 2019 Issue 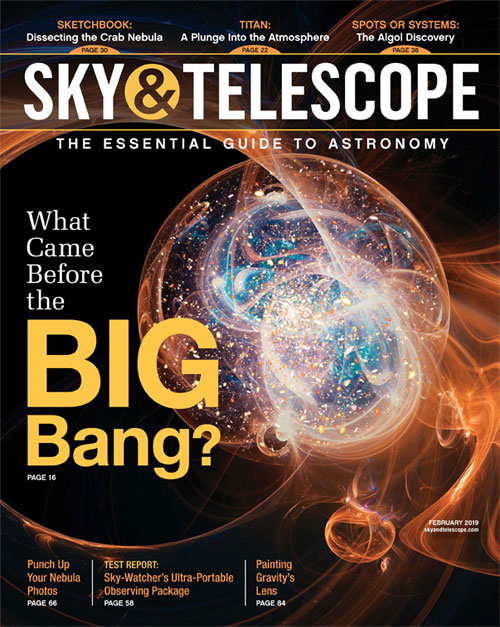 Stay on the forefront of science with the February 2019 issue of Sky & Telescope. Scientists used to consider "what came before the Big Bang?" a meaningless question, as time itself was thought to be created in the Big Bang — there was no before. Author Faye Flam explores how that's changing as cosmologists struggle to understand our universe. Another mystery unfolds in planetary scientist Sarah Hörst's feature article on Titan. Hörst shows us how this strange — and strangely familiar — can teach us about the chemistry of life. And when February nights clear, take the opportunity to do some exploration of your own in the Crab Nebula. Howard Banich takes us on a tour of this celestial cloud and reveals how we can best see its splendor. Meanwhile, dawn and dusk skies alike hold an abundance of planetary treats: Venus, Saturn, and Jupiter greet the early bird while Mercury and Mars accompany the night owl. Also read about how you can find lunar volcanic sights, explore Sirius and its surroundings, and observe  the variable star RS Puppis. Enjoy these and other stories in the February 2019 issue of Sky & Telescope.

What Came Before the Big Bang?
Cosmologists are tackling a once-verboten question with out-of-the-box thinking.
By Faye Flam

Titan's Veil
Saturn’s largest moon has a remarkably complex atmosphere, with all the chemical ingredients for life as we know it.
By Sarah Hörst

Above the Southern Horn of Taurus
The Crab Nebula is amazing now matter how you look at it.
By Howard Banich

Giving Nebulae a Boost
Here’s a novel technique to bring out emission nebulosity in your astrophotos.
By Timothy Jensen

Mission to Mercury Launches
Check out an infographic that shows Bepi Colombo's seven-year journey to the innermost planet and watch video of the spacecraft's October 19th launch.

Ancient Merger Wreckage in the Milky Way
See a simulation of the ancient collision that may have shaped our galaxy.

Watch the Crab Pulsar Pulse
Click the above link to get an idea of what Howard Banich saw at the telescope when he set eyes on the Crab Nebula through an OIII filter. You can also see the Crab Nebula's expansion over a decade-long timeframe in this short animation, made by Detleff Hartmann using images he took with his homemade 17.5-inch telescope.

Dawn Triplet
A trio of bright planets adorns the dawn skies in February, while Mercury joins Mars mid-month to grace the evening skies.
By Fred Schaaf

Echoes from a Variable Star
RS Puppis continues to delight astronomers more than 120 years after its true nature was discovered.
By S. N. Johnson-Roehr

It All Depends on Dikes
The appearance of volcanic lunar features has everything to do with what was happening below the surface eons ago.
By Charles Wood

The Dog Star's Realm
The brilliant beacon of winter leads us to wonderful things.
By Sue French