Inside the January 2007 Issue 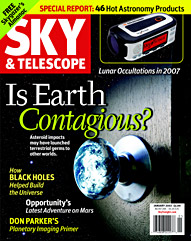 Spectrum
What Would George & Henri Do? By Richard Tresch Fienberg

Martian Photo Opportunity
The Mars rover Opportunity has reached what may be its final destination: picturesque Victoria Crater. By Selby Cull

Reverse Panspermia: Seeding Life in the Solar System
Earth life may have hitchhiked to other worlds in the solar system inside rocks blasted away in giant impacts. By Selby Cull

How Black Holes Helped Build the Universe
Matter falls into black holes, but it also gets blown away, and that process shapes cosmic evolution. By Christopher Wanjek

The Moon's Far Side: Nearly a New World
Out of sight, out of mind? New types of terrain lurk just around the Moon's edge. By Charles A. Wood
Rambling Through the Skies: Heavenly Reward
Royal celestial honors have rarely lasted beyond the subsubsequent coronation. By E. C. Krupp

Southern Hemisphere's Sky
The River of the Night By Greg Bryant

Sun, Moon, and Planets
Venus and Saturn Adorn the Sky By Fred Schaaf

Exploring the Moon
Concentric Fractures and Craters By Charles A. Wood

Celestial Calendar
A Fire on Orion's Club By Alan MacRobert

Observer's Log
Measuring the Astronomical Unit from Your Backyard By Robert J. Vanderbei and Ruslan Belikov

Books & Beyond
Astronomers You Should Know, Walking Tour of Discovery, and more . . .

Astronomy Online
Visit to a Namesake By Stuart J. Goldman

Star Trails
On the Shoulders of Giants By David H. Levy

Hobby Q&A
What does it mean to say a planet has "cleared the neighborhood around its orbit?" When was the last time a professional astronomer actually looked through an eyepiece to do research? and more . . .

Astrophotography
How to Process Planetary Images By Donald C. Parker