Inside the January 2019 Issue 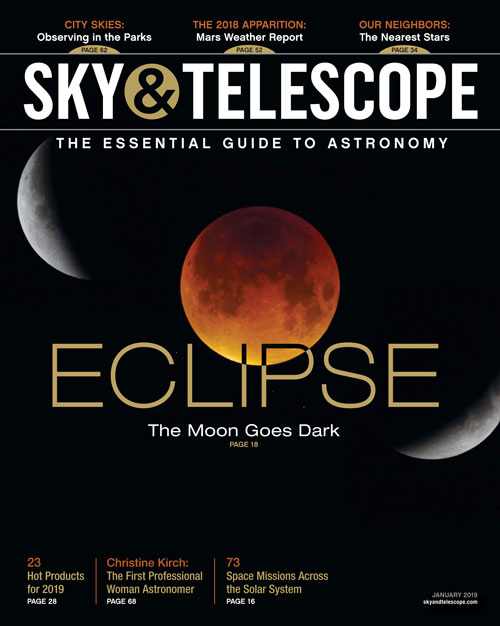 In the January 2019 issue of Sky & Telescope, learn about everything from equipment to the eclipse. On the night of January 20-21 the Earth will block the Sun's light and cast a shadow on the Moon. Discover what you can expect to see during the lunar eclipse and pick up some viewing tips. Gravitational-wave detectors on Earth cannot sense the gravitational-waves from supermassive black hole mergers — learn how observing millisecond pulsars may enable scientist to detect them. Check out the 21 new products S&T's editors consider to be 2019's most interesting. Plus, learn about the characteristics of our nearest stellar neighbors. Do you know who the first professional woman astronomer was? This issue has the answer. Check out our observing picks for the month, explore the secrets of a young and mysterious meteor shower, and observe objects at their highest in the night sky! Read about one amateur astronomer's project to build a folded Serrurier refractor. We also have a sky tour of stars and star clusters to view from light polluted suburban skies. Enjoy these and other stories in the January 2019 issue of Sky & Telescope.

The Great American Lunar Eclipse
January’s “disappearing” Moon is wonderfully timed for skywatchers in the Americas.
By Joe Rao

Pulsar Timing Arrays
Astronomers are watching dozens of cosmic timepieces for signs of spacetime ripples passing through.
By Robert Naeye

Hot Products 2019
Our 21st roundup highlights the market’s most intriguing new gear.
By the Editors of S&T

Meet the Neighbors
Astronomers are compiling a census of the nearest stars.
By Keith Cooper

400 Thalers or 50 Pounds
Who was the first professional woman astronomer?
By Gabriella Bernardi

Pattern in Milky Way’s Stars Suggests Recent Galactic Whack
Read the full story about the unexpected pattern in the motions of the stars in the Milky Way's disk points to a recent whack from another galaxy.

Voyager 2 Approaches Interstellar Space
An increase in the rate of cosmic rays detected by Voyager 2 indicates that the spacecraft is approaching the heliopause, where the solar wind gives way to the interstellar medium.

The Many Directions of Winter
January offers ample opportunities for many celestial scenes.
By Fred Schaaf

The Odd Quads
We're still learning the secrets of this young and mysterious meteor shower.
By S. N. Johnson-Roehr

A Dusty Apparition
Mars was bustling with activity during the close opposition of 2018.
By Sean Walker

Meridian Observing
Viewing is at its best when an object is at its highest in the night sky.
By Sue French