Inside the January 2020 Issue 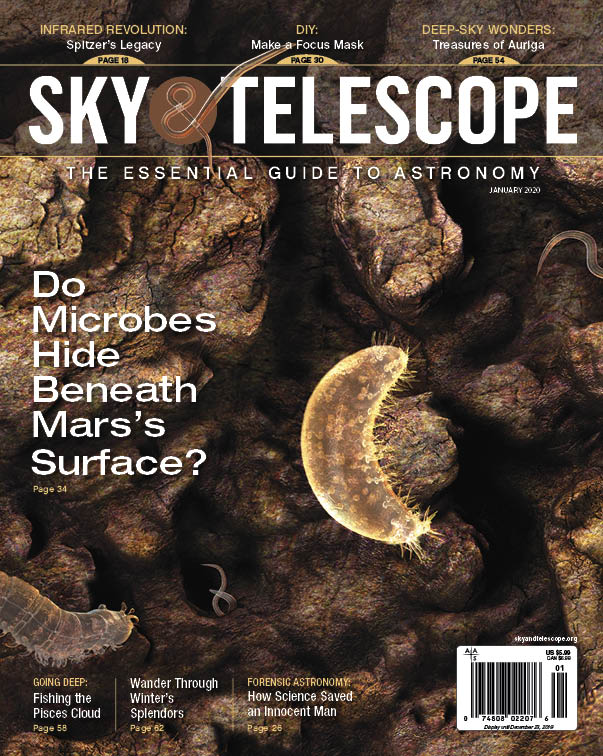 Astronomy Defends an Innocent Man, Martian Microorganisms, and the End of the Spitzer Space Telescope 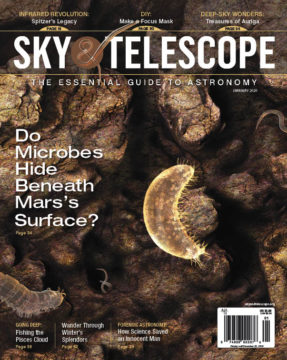 In January’s issue of Sky & Telescope, join scientists in exploring what might be living beneath the surface of Mars. After discovering microbes on the ocean floor and deep in Earth’s crust, scientists hope to find water and microorganisms hidden in the Red Planet's crust. NASA’s Spitzer Space Telescope has documented exoplanets crossing in front of their stars and detected galaxies seen as they were over 13 billion years ago. Now, relive the scientific discoveries of the Spitzer, as it prepares to send Earth its final observations. Next, take a step even further back in time and watch as astronomer Father William Rigge saves an innocent man from a murder conviction using a photograph and the Sun. Join Fred Schaaf as he uses song lyrics from Cat Stevens’ Silent Sunlight to describe the January night sky. If you’re up for a challenge, join us in hunting down the Kordylewski Clouds. First found by Kazimierz Kordylewski, these clouds are the most challenging observing target in the solar system. Even professional astronomers and space probes have failed to detect them. Jerry Oltion will take you on a journey through the winter stars, and Sue French is taking another look at Auriga the Charioteer this month. January has plenty of meteor showers planned. Also, watch out for two bright asteroids, 5 Astraea and 511 Davida.

Space Missions in 2020
Our digest of active space missions for 2020. Included are astrophysics, space weather, planetary, and solar and stellar observation missions.
By David Dickinson and Terri Dubé

Spitzer's Legacy
NASA’s premier eye on the infrared sky is shutting down after operating more than three times longer than designed.
By Michael Werner and Thomas Soifer

Shadow of a Doubt
In a historic Omaha court case, astronomical evidence played a key role in foiling a plan to frame a man for attempted murder.
By Jeffrey Dobereiner

Mesh Focusing Masks
This easy-to-assemble imaging aid can take the guesswork out of focusing.
By H. R. Suiter and W. P. Zmek

The Martian Underground
Discoveries of life deep beneath Earth’s surface are provoking scientists to wonder what might hide in the subsurface world of Mars.
By Javier Barbuzano

A Tourist's Guide to the Winter Highlights
Our nighttime favorites series continues with a selection of winter's splendors.
By Jerry Oltion

Catch the Quads
After a bright Moon slammed both the Perseids and the Geminids last year, January opens with the promise of an excellent show from the Quadrantid meteor shower.
By Bob King

The Kordylewski Clouds
Join the hunt for these enigmatic lunar attendants.
By Thomas A. Dobbins

Auriga, the Charioteer
Some of the sky’s finest nebulae and star clusters adorn this constellation.
By Sue French

I noted that the hot products feature seems to have gone from both this and the Feb 2020 edition. I kind of liked this feature. Has this been removed fomr the magazine under the new ownership?

Editor in Chief Peter Tyson replies, "In 2019 we decided to discontinue Hot Products. S&T began this annual feature over 20 years ago, when it was difficult for amateurs to find information about new equipment. With the internet now widely accessible and loaded with reliable, up-to-date product information, we felt Hot Products had run its course. We will continue to publish New Product Showcase, Test Reports, and other equipment-related features."

I cannot access the magazine using my tablet even thought I have the app and a current subscription.

Hi Michael, We can't effectively answer subscription questions through comments, but if you email [email protected], our customer service department should be able to help you with any problems.

"Shadow of a Doubt" is a great article, but the sidebar "Shadow Science" has a diagram on page 28 that is confusing, at best. The text in the sidebar talks about "The Sun's hour angle .. determines the time of day", however the diagram labelled with time of day (Noon, 3 p.m., 6 p.m.) doesn't show hour angle, it shows azimuth, which is completely different from hour angle. The hour angle curves (Noon, 3 p.m., 6 p.m.) should meet at the North Celestial Pole, not the Zenith.