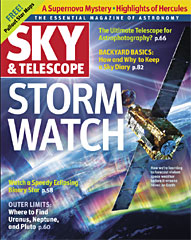 Spectrum
Pluto on My Mind By Richard Tresch Fienberg

Solar Forecast: Storm Ahead
Our star is prone to powerful outbursts — and solar physicists wish they could predict when the next one will come. By C. Renee James

A Bigger Bang
White-dwarf stars always seemed to blow themselves to bits with the same splashy fireworks. Then Supernova 2003fg broke the rules.
Beyond the Printed Page: Simulating a Type Ia Supernova By David S. Stevenson

read now
Rambling Through the Skies: Altaring Direction
Ceremony and sacrifice inspired cultures to stoke a pyre in the sky. By E. C. Krupp

Northern Hemisphere's Sky
A Constellation Not Like Orion By Fred Schaaf

S&T Test Report Dioptrx: Prescription for Perfection
Thanks to this nifty little eyepiece accessory from Tele Vue, observers with astigmatism no longer have to wear eyeglasses while looking through a telescope. By Dennis di Cicco

read now
Backyard Basics
Observing Logbooks: How and Why By Paul Markov

Hobby Q&A
Why aren't stars and planets more colorful in my telescope? Many celestial objects are named after people. Who is Stock? and more ...

Focal Point
Waiting for the Big One By Sten Odenwald