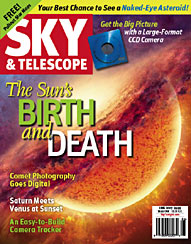 Stellar Origins: From the Cold Depths of Space
Close scrutiny of low-mass stars and their birthplaces is shedding new light on how our own star formed. By Debra Shepherd

From Here to Eternity: The Fate of the Sun and the Earth
In a little more than a billion years, the oceans will boil away and Earth will be roasted bare. Later, things turn really ugly. By Gregory P. Laughlin

Books & Beyond
Three Views on the Cosmos, Cellarius's Celestial Inheritance, and more ...

Hobby Q&A
Should I keep my lens cap on or off while my telescope warms up after a really cold night out? and more ...

Focal Point
Astronomy in Popular Culture
Beyond the Printed Page: Answers to the Quiz By Andrew Fraknoi