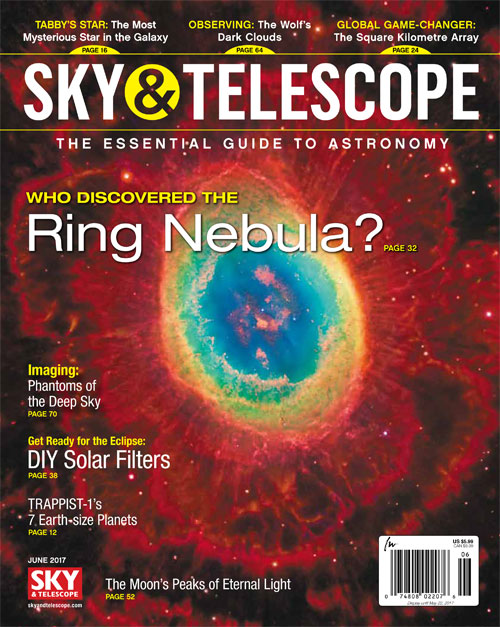 What is Tabby's Star? Who Discovered the Ring Nebula? Can Life Survive in TRAPPIST-1?

Mysteries abound in astronomy, and not all the questions have answers — yet. Tabby's Star is emblematic of the search for truth. This seemingly ordinary star occasionally undergoes rapid dips and dives in brightness, a phenomenon that Benjamin Montet and discoverer Tabetha Boyajian are still trying to understand. The recent discovery of not one or two, but seven planets around the TRAPPIST-1 star, three of them in the habitable zone, poses interesting questions for those seeking life on other planets. Even seemingly settled questions, such as who discovered the Ring Nebula, can earn a new answer with historical research from S&T Contributing Editor Don Olsen and colleague Giovanni Caglieris. Join the search for answers, and also find explanations for a DIY solar filter, a guide to observing RR Lyrae stars, a rove around the Moon's sunlit poles, and more, in the June 2017 issue of Sky & Telescope.

The Most Mysterious Star in the Galaxy
The strange, dips, and dives of an otherwise ordinary star defy most — but not all — explanations.
By Benjamin Montet & Tabetha Boyajian

The Square Kilometre Array
Spread across two continents, the SKA will be the largest astronomical facility ever built.
By Govert Schilling

Who Discovered the Ring Nebula?
All the books name the wrong "discoverer" for this iconic object.
By Don Olson & Giovanni Maria Caglieris

The Dark Wolf of Summer
Stay up late to track down these absorption nebulae in Lupus.
By Richard P. Wilds

Phantoms of the Deep Sky
Hunt down molecular clouds and other elusive targets.
By Richard Jakiel

The Fast Pulse of RR Lyraes
An amateur program tracks the quirks of the oldest standard-candle stars in the universe.
By Alan MacRobert

Peaks of "Eternal" Light
If we ever try to live on the Moon, the best locations will be polar mountains bathed in nearly continuous sunlight.
By Charles Wood

Doodles in the Sky
From sharks to dogs, hats to rings, these night-sky patterns will have you seeking more.
By Sue French