Inside the March 2017 Issue 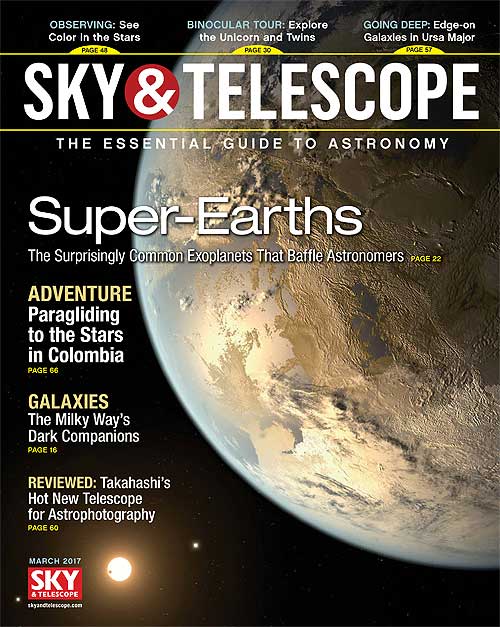 For decades, the solar system gave astronomers the completely wrong idea of what planets dominate the galaxy. Rather than terrestrial planets or gas giants, it turns out the most common planet type is a super-Earth, sometimes also called a mini-Neptune. But what characterizes a super-Earth — and just how likely are they to be habitable? Those are the questions Shannon Hall addresses in this month's feature story.

Likewise, a look into our galaxy's surroundings has long given us the incorrect impression that the Milky Way has only a few dwarf galaxy companions, but scientist Keith Bechtol catches us up on the recent wave of discoveries of ultra-faint galaxies and what they tell us about our galaxy.

Tour our galaxy yourself tonight — grab a pair of binoculars and bring the observing targets from Mathew Wedel's article for a seasonal tour of the Milky Way. A deeper look offers plenty more to explore within Venus, Leo Minor, and Ursa Major. Clear skies!

The Milky Way’s Dark Companions
As the search for our galaxy’s satellites accelerates, so-called ultra-faint dwarf galaxies may help answer fundamental questions about the universe.
By Keith Bechtol

The Secrets of Super-Earths
The galaxy is teeming with planets that have no parallel in our solar system and were once thought impossible.
By Shannon Hall

Wandering the Winter Milky Way
Grab your binoculars and head outdoors for this seasonal sky tour.
By Mathew Wedel

Launching Astronomy into the Wilds of Colombia
Packing two telescopes, we crossed backcountry little reached by science educators to spread excitement about both ecology and the universe.
By Marja Seidel & Kira Buelhoff

What Makes a Planet Habitable?
In our March 2017 issue we include a diagram of all small, confirmed exoplanets in their stars’ habitable zones. Here’s the saga of how we decided which planets to put on that list.

Star Parties
Find a listing of major 2017 star parties in the U.S. Also, visit our Events Calendar to peruse listings of star parties, astronomy lectures, workshops, and other events.

An Evening-Morning Star
Vivid Venus shines in evening twilight — and then again at dawn.
By Fred Schaaf

The Best Occultation of 2017
On the night of March 4th, watch the Moon occult Aldebaran naked-eye. Better yet, place yourself on the graze line.
By David Dunham

The Twilight Zone of Venus
Watch for interesting atmospheric wisps when our neighbor world passes between Earth and the Sun this month.
By Thomas A. Dobbins

Little Lion
This celestial cat may be small, but it contains an impressive number of deep-sky sights.
By Sue French