Inside the March 2018 Issue 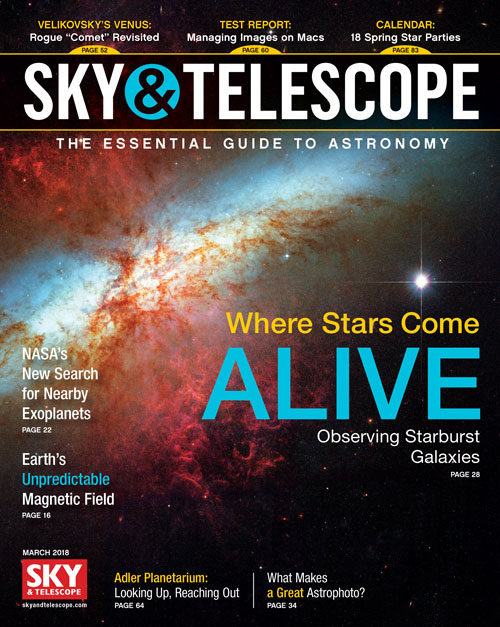 In the March 2018 issue of Sky & Telescope, read about astronomical adventures both near and far. Go on a sightseeing tour of starburst galleries. Learn about the Adler Planetarium's mission to connect people to the sky, informed by its past and future. Explore how NASA's new search for exoplanets will open up our understanding of those nearby. Discover the history of Earth's magnetic field and why it changes. In this issue, we also investigate what makes a great astrophoto. Check out our observing picks for the month, including all five bright planets, asteroid occultations, and more! Enjoy these and other stories in the March 2018 issue of Sky & Telescope.

Earth's Changing Magnetic Field
We depend on a global electromagnetic bubble to protect us from space radiation. Is that stalwart defense wavering?
By Robert P. Naeye

TESS: The Transiting Exoplanet Hunter
NASA's next planet mission will survey roughly 200,000 nearby stars for signs of alien worlds.
By Sara Seager

What Makes a Great Astrophoto?
Recognizing what goes into an outstanding image can help to improve your own work.
By Sean Walker

#LookUp with Us
Learn how modern planetariums can connect communities with the sky.
By Michelle B. Larson

A Deeper View of the Hubble Ultra Deep Field
Learn about the upgrade to the iconic image of faraway galaxies, and one of the most-observed regions of space.

Martian Magnetism
Read about the magnetic field (or lack thereof) on our red neighbor.

Imaging Foundations with Richard Wright
Get caught up on our newest blog all about the fundamentals of astrophotography.

Colors and Clusters
You don't have to wait for summer nights to see a pleasingly colored double star.
By Fred Schaaf

Mercury in the Month of Mars
March may be named for Mars, the Roman god of war, but Mercury, god of commerce and thieves, steals the show this month.
By S. N. Johnson-Roehr

Velikovsky's Venus
A controversial 1950 book declared that our neighbor world was spawned by Jupiter 3,500 years ago and nearly struck Earth — twice.
By J. Kelly Beatty

The Crab and the Water Monster
Hydra and Cancer, once fearsome adversaries of Hercules, now ornament our early spring skies.
By Sue French