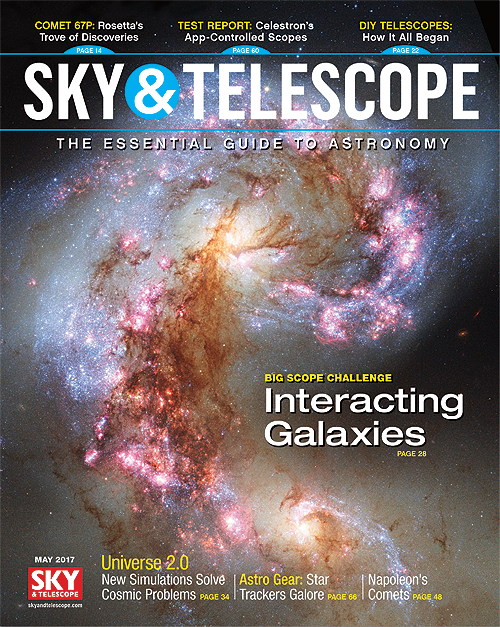 From Comets to Galaxies to (Pieces of) the Universe

Join Joel Parker, a member of the Rosetta science team, in exploring the anatomy of duck-shaped Comet 67P. Though Rosetta ended its mission with a controlled descent onto the comet's surface last September, analysis of the data it sent back is ongoing and revealing a complex world. Then peer beyond our solar system from your backyard — our cover story features a big-scope tour through the fantastic forms of seven interacting galaxies. Want to see on an even wider scale? Computer simulations can take you there — though it turns out that the biggest breakthroughs in understanding our cosmos may be achieved by not trying to simulate everything at once. Read Benjamin Skuse's recipe on baking a universe to find out why. Plus, find out more about the current 4P Comet Campaign, see Jupiter and Saturn, an explore the shimmering stars and glimmering galaxies in the vest of Virgo, the Virgin.

Anatomy of a Comet
Comet 67P/ Churyumov-Gerasimenko proved to be more complex than just a “dirty snowball.”
By Joel Parker

The Real Origins of Amateur Telescope Making
Amateur astronomy is what it is today because of mirror-grinding enthusiasts more than a century ago.
By Keith Venables

Galaxies in Collision
A dark night and a big scope produced fantastic views of these seven interacting pairs.
By Steve Gottlieb

Baking a Universe
Cosmologists are shining a light on the universe’s mysteries by adding an unassuming ingredient to simulations: ordinary matter.
By Benjamin Skuse

Portable Star Trackers
Tracking is the next step on your journey to capturing the beauty of the night sky.
By Jerry Lodriguss

Comet Campaign
Read about the campaign to observe the steadily brightening Comet 41P and its compatriots and how you can join in the fun.

List of Annual Star Parties
Find the information you'll need for some of the top astronomical events in the coming months. Also be sure to check Sky & Telescope's Events Calendar for specific details.

Fly Through a Simulated Galaxy
Take a ride through a galaxy in the Latte simulation as it merges with a dwarf galaxy.

Jove Owns the Night
Jupiter puts on an overnight show, but Saturn soon approaches the stage.
By Fred Schaaf

Saturn Has a Southern Apparition
With rings still tipped invitingly open, Saturn invites your most careful scrutiny.
By Alan MacRobert

Comet 41P Is Ideally Placed
If you haven't started watching it yet, now's the time — here you'll get finder charts and observing tips.
By Charles Wood