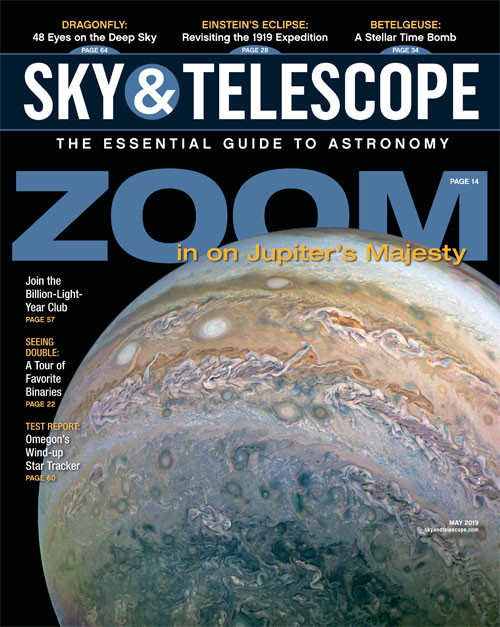 Find inspiration in the May issue of Sky & Telescope, where we feature awe-inspiring, amateur-processed images of the king of planets, an in-depth study of Betelgeuse — the star most likely to go supernova (or is it?) — and a look behind the scenes of the Dragonfly project, where astronomers built an insect-eyed telescope from off-the-shelf equipment. The skies are bright with promise, as Jupiter and Saturn are approaching their oppositions. Meanwhile, the brightest dwarf planet, Ceres, is on display as it reaches opposition at the end of May. The May issue also includes a Test Report on the new Omegon Mini Track LX2, which provides no-frills sky tracking, and a look at a Raspberry Pi-based camera controller.

JunoCam at Jupiter: Where Science Meets Art
Amateur processing has revealed this fantastic world from a unique perspective.
By Candice Hansen-Koharcheck

Binary Orbits Explored
Follow the author on a celestial tour of some of his favorite binary pairs.
By Phillip Kane

A Relatively Important Eclipse
A century ago an eclipse revealed to the world that the universe bends to Einstein's whim.
By Benjamin Skuse

The Allure of Betelgeuse
Astronomers are itching to know when this red supergiant will go supernova, but a clear answer eludes them.
By Peter Tyson

Insect Eyes on the Deep Sky
A team of astronomers uses an innovative approach to create the world's fastest telescope system.
By Richard S. Wright, Jr.

A Bevy of Fast Radio Bursts
Read the full story on the discovery of 13 new — and no less mysterious — fast radio bursts.

JunoCam Gallery
See more amateur-processed images of Jupiter images and learn how to participate in this project yourself.

The Billion Light-Year Club
If Steve Gottlieb's Going Deep column whetted your appetite for quasars in your telescope, find more targets in this data table, including their magnitude, positions on the sky, and distance from Earth.

The Planets Perform
A dwarf planet reaches opposition in May, while the two gas giants march towards their own oppositions later on.
By Fred Schaaf

Ceres at Opposition
The biggest asteroid and brightest dwarf planet is at its best for 2019.
By S. N. Johnson-Roehr

Eyeing Jupiter
Get the most our of your time observing the planet king.
By Richard Jakiel

Rubies and Sapphires
These brilliant jewels offer respite to the weary soul.
By Sue French