Inside the Night Sky September/October 2006 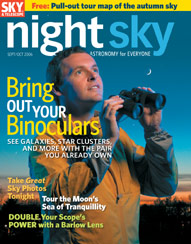 The Sky Tonight September: Walk the Milky Way
Trace out the constellations that mark the plane of our home galaxy. By Alan MacRobert

The Sky Tonight October: Tracing Andromeda
It's easy to spot Andromeda, Pegasus, and other autumn constellations. By Alan MacRobert

Take A Star-Hop: Visit the Swan and Fox
Learn to hunt celestial wildlife with a telescope. By Sue French

Science Spotlight: The Ring and the Helix
Two ghostly glows await you in the autumn sky. By Ken Hewitt-White

Other Worlds: Apollo's Tranquil Sea
Explore the region of the Moon where Apollo 11 landed. By Andrew Chaikin

Binocular Bonanza!
Here are 40 celestial showpieces to track down with your binoculars. By James Mullaney

First Steps in Sky Photography
Got a camera and a tripod? Then let's go out and take some sky photos! By Dennis Mammana

Skyscapes
Beautiful images taken by backyard astronomers around the world.

Success Stories: Eclipse at the Edge
An eclipse chaser heads to Brazil to bask in the Moon's shadow. By Janne Pyykko

read now
Skill Builders: How Bright the Stars?
Learn how to rate the magnitudes of celestial objects. By Alan MacRobert

read now
Choosing & Using
Power Punch: The Barlow Lens
Get a closer look by using one of these handy add-ons with your eyepiece. By Rick Davis

Gearing Up: Rain, Rain, Go Away!
Stuck with cloudy weather? Heare are some celestial activities to pass the time. By Stuart J, Goldman