Inside the November 2007 Issue 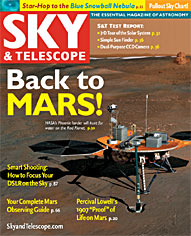 The Great Mars Chase of 1907
A century ago astronomer Percival Lowell came closer than he ever would in making his case that the Red Planet was inhabited. By William Sheehan and Anthony Misch

Dark Beasts of the Trans-Neptunian Zoo
The count of dwarf planets and state-size icebergs out beyond Neptune now tops 1,000. And they don't seem to want us to figure them out. By Mark Littmann

Destination: Mars
Phoenix is en route to the Red Planet, which in recent years has become crowded with spacecraft. By Kristina Grifantini

S&T Test Report: Traveling Through the Solar System
With Software Bisque's Seeker, the next tour of our solar system is departing from your nearest computer terminal. By Joe Heafner

S&T Test Report: Quick Looks
Helio Pod Solar Finder
This little gizmo from FAR Laboratories is an inexpensive and convenient aid to aiming your telescope at the Sun. By Richard Tresch Fienberg

Rambling Through the Skies
Going Like Sixty By E. C. Krupp

Novelties of November By Fred Schaaf

Sun, Moon, and Planets
A Great Month for Planets By Fred Schaaf

Your Telescopic Guide to Mars
Here comes your last chance to see the Red Planet this big for the next nine years. By Alan MacRobert

Star Trails
Flight to the Future By David H. Levy

Focusing Your DSLR on the Sky

Digital SLR cameras make deep-sky shooting easy, but first you have to focus them at infinity. Here's how. By Alan Dyer