Inside the November 2017 Issue 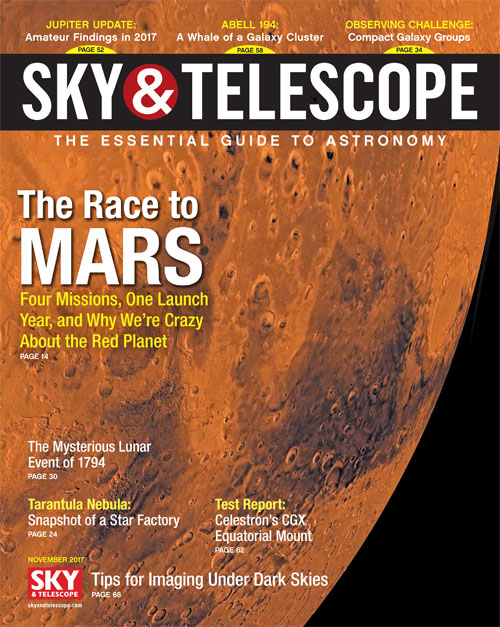 Exploring Our Neighborhood: Racing to Mars, Our Neighbor Tarantula, and a Volcano on the Moon?

Astronomers spend their nights observing objects both near and far. But in astronomy, the sense of neighborhood depends on the object you're observing. Our neighbor, planet Mars, is set to have up to four visiting spacecraft that should launch in 2020. The Tarantula Nebula, a star-making factory in our galactic backyard, allows researchers to study star formation as it occurred long ago. Learn the possible solution to a volcanic mystery on our closest neighbor, the Moon. Learn about the Hickson Compact Groups, a trio of variable stars to observe, and challenging galaxies to find in the Great Square of Pegasus. Enjoy these and other stories in the November 2017 issue of Sky & Telescope.

The Race to Mars
Timing is everything in space exploration, and in 2020 the time will be right to launch an armada of explorers to the Red Planet in search of signs of life.
By Benjamin Skuse

Treasures of the Tarantula
Researchers eagerly study a prodigious star-making factory in our galactic backyard.
By Greg Bryant

The 1794 Volcano on the Moon
Sometimes an astronomical mystery seems very easy to solve. Perhaps too easy?
By Andrew Livingston

The Road Less Traveled
These nine compact galaxy groups show that stepping outside your comfort zone can be worth the effort.
By Ted Forte

Bright-Sky Imaging
There are plenty of things to shoot under moonlit and urban skies.
By Ron Brecher

Arp Catalog
In 1966 Halton Arp published his Atlas of Pecular Galaxies. The entire catalog is now available online and as a PDF download.

A Thrilling Trio
These three variable stars will hold your attention for nights on end.
By Fred Schaaf

The Poleward Trek of Comet ASASSN1
Heading far north, this telescopic target should be at its best in October and November.
By Alan MacRobert

Jupiter — From Earth to Juno
Amateur astronomers are benefitting from — and adding to — Juno's observations.
By John H. Rogers

Square Galaxies
Spend some time roping this herd of faint fuzzies in the Great Square of Pegasus.
By Sue French

In your cover story, Skuse quotes planetary scientist Briony Horgan as saying, "It's actually hard to tell what was made by life and what wasn't...unless you're looking at dinosaur bones." We disagree. A Martian fossil photographed with the Microscopic Imager camera of NASA's Opportunity rover on sol 34 of that mission (27 Feb 2004), at Mars' Meridiani Planum looks a whole lot like Reteocrinus elongatus, a marine animal in the crinoid family. Fossils of both can be seen at http://www.panspermia.org/whatsnew83.htm#20151028. Any response is welcome.