Inside the September 2007 Issue 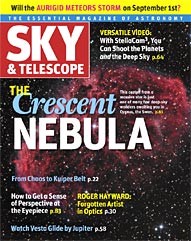 From Chaos to the Kuiper Belt
Billions of icy bodies beyond Neptune remind us that the early solar system was a frenzy of planet-building activity.By Mark Littmann
Beyond the Printed Page: Chaos in the Early Solar System

Roger Hayward: Forgotten Artist of Optics
Letters hidden in a box for decades reveal that this obscure architect and commercial artist was also one of the 20th century's most gifted optical designers. By Trudy E. Bell

Rambling Through the Skies: Green Cheese
Did some people really believe that the Moon was part of the food pyramid? By E. C. Krupp

Exploring the Moon
Tempting Tranquillity By Charles A. Wood

S&T Test Report: Next-Generation Video: Adirondack's StellaCam3
Leave your computer at home! This new camera instantly displays video images on any television monitor of everything from the Moon and planets to deep-sky objects. By Johnny Horne

Books & Beyond
Our Sky Romance, Arped and Ready, and more ...

Hobby Q&A
How can I see features on Venus in my telescope? Does the presence of the jet stream above my observing site cause good or bad seeing? and more ...