Inside the September 2014 Issue 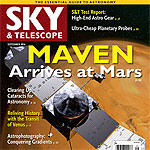 How did Mars lose its rich atmosphere and planet-wide magnetic field? Our cover story, written by S&T assistant editor Camille M. Carlisle, previews NASA's Maven mission, due to arrive at the Red Planet in late September to investigate these ongoing mysteries. Elsewhere in the solar system, history lives again in the project authors Rod Pommier and Richard Smith undertook when they measured the 2012 transit of Venus. Plus, read an amateur astronomer's account on surviving the medical maze of cataract surgery, learn about the potential of interplanetary nanosatellite explorers, and explore deep-sky treasures in Cygnus the Swan.

Reliving History
The authors observed the 2012 transit of Venus to replicate experiments from past centuries.
By Rod Pommier & Richard Smith

Clearing the Clouds: Cataract Surgery for Astronomers
One amateur's journey through the medical maze of cataract surgery has lessons for any observer facing the same condition.
By Kathy & Jerry Oltion

20 Fun Naked-Eye Double Stars
From easy to challenging, here are some star pairs every skywatcher should know.
By Jerry Lodriguss

Conquering Gradients
Get the most out of this powerful technique in PixInsight.
By Rogelio Bernal Andreo

New Life for Kepler by Maria Temming
Get the full story behind the revamping of NASA's crippled Kepler spacecraft.

How Amateurs Snagged a Spacecraft by Kelly Beatty
Watch a video of the long-retired ISEE 3's simulated trajectory and capture.

Inflation Evidence Inconclusive by Camille M. Carlisle
Read the original papers that show why this year's biggest cosmology result may not be what it seems.

Lunar Librations by Sean Walker
Librations and other lunar data for September 2014.

Mars Meets Its Rival
The Red Planet has a fine conjunction with Antares this month.
By Fred Schaaf

Ice-Giant Spotting
Uranus and Neptune are in reach of binoculars as they go their separate ways.
By Alan MacRobert