Inside the April 2016 Issue 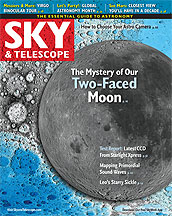 A familiar face greets us at every full Moon, but the far side we never see reveals just how much we don't know. At the dawn of the Space Age, our celestial neighbor showed us its hidden face: rough cratered terrain so different from the near side, it continues to puzzle astronomers to this day. Plus, explore the Moon's unique geology with Charles Woods, which investigates curious features surrounding the lunar Great Wall. Then leave the Moon behind for galaxies millions of light-years away: learn how primordial sound waves left their mark on the cosmic web of galaxies we see today, and go explore some galaxies of your own — go fishing with binoculars in the Virgo galaxy cluster or dive deeper in Leo. Finally, find observing advice, maps, and online resources to help you make the most of the closest view of Mars in a decade.

Our Two-Faced Moon
Planetary scientists still don't know why one side of Earth's satellite looks so different from the other.
By Paul Spudis

Mapping the Universe's Ancient Sound Waves
Astronomers are combing through the largest map of galaxies ever created to find the imprint of primordial sound waves.
By Daniel Eisenstein

Big Fish, Small Tackle
Grab your binoculars and drop a line in the deep pool of the Virgo Galaxy Cluster.
By Mathew Wedel

Star Parties in the 21st Century
Organized observing events have undergone explosive growth since the 1980s. Here's why.
By Rod Mollise

Choosing a Camera for Astrophotography
The question isn't which is best, but which is best for your goals.
By Richard S. Wright, Jr.

Cosmic Sound Waves
Watch how science and technology work together to help us hear the echoes of primordial sound waves.

Astronomy Events
As spring approaches, so does star party season. Find an event near you or submit your own!

New Star and Exoplanet Names
Get the full story on the International Astronomical Union's unprecedented contest to name stars and exoplanets.

Lunar Librations
Librations and other lunar data for April 2016.

Four Fine Planets
April spreads a variety of sights along the ecliptic.
By Fred Schaaf

At Last, a Fine Mars Apparition
Mars moves into its best showing in a decade.
By Alan MacRobert