Inside the April 2020 Issue 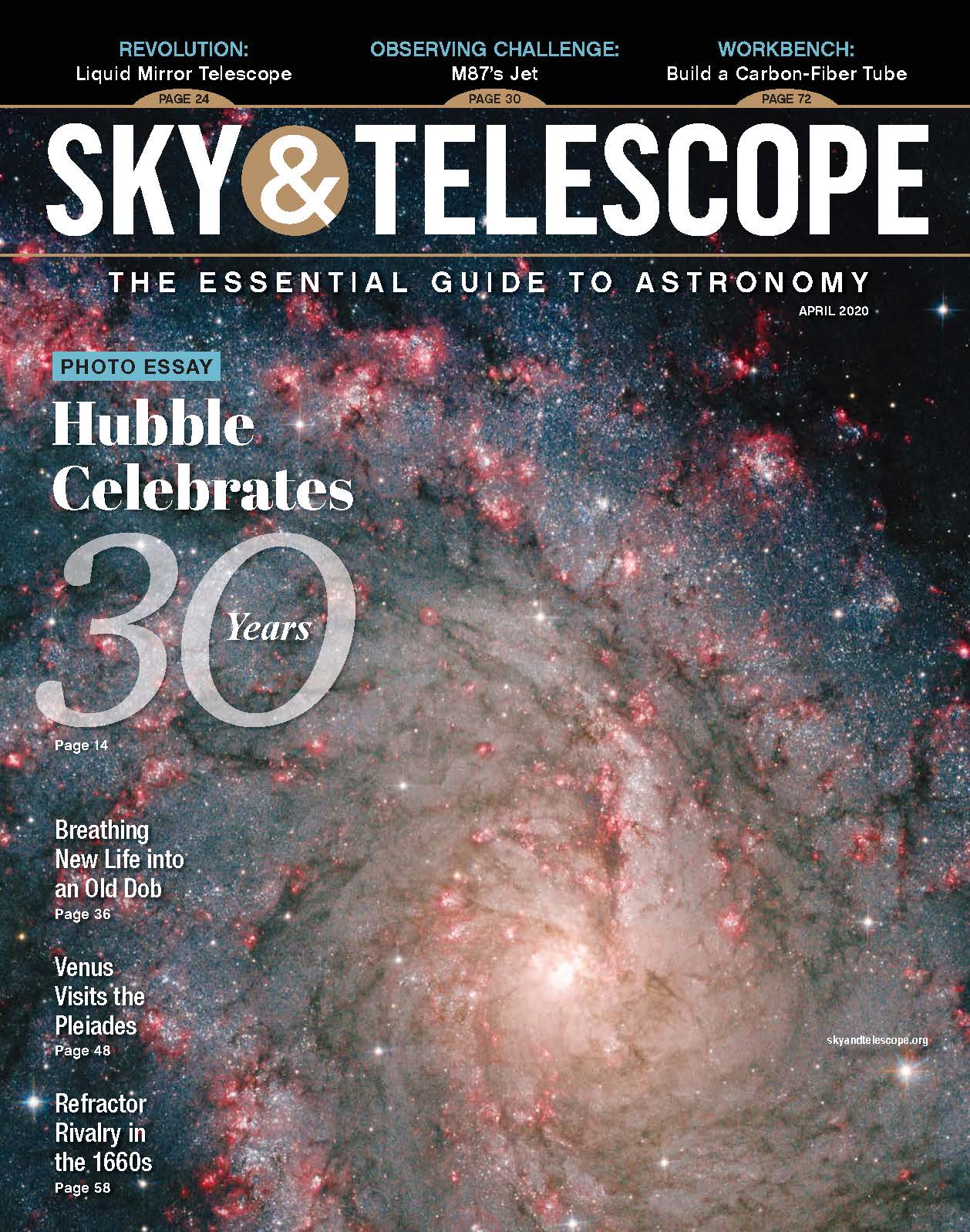 In April’s issue of Sky & Telescope, we take you behind the scenes for the 30th anniversary of the Hubble Space Telescope’s launch. Amateur astronomers Vanessa Thomas and Kevin Hartnett offer insight into what it’s like working with NASA and one of its Great Observatories. Then, from space telescopes to liquid telescopes, we cover the creation of the International Liquid Mirror Telescope, a telescope made with a mirror of spinning mercury.

And speaking of telescopes, who could forget John Dobson, the man who brought telescope making to the masses? We’re remembering him this month with a feature on the refurbishment of an unfinished Dobsonian that was made in one of his telescope making classes.

Then we dive into the roots of telescope-making with a pair of old-fashioned refractors in a dispute between two astronomers competing to be the best optician in 17th-century Europe. They may not have been able to see it back in 1663, but you can see M87’s jet, if you can go deep enough. A 12-inch telescope will do, but contributing editor Howard Banich recommends the 90-inch Bok telescope on Kitt Peak for the best view of the jet sprouting from the first black hole to ever be imaged by humans.

The Universe Through Hubble’s Eye
Amateurs celebrate the venerable space telescope’s 30th anniversary with a look at some of its most mesmerizing images.
By Vanessa Thomas

Quicksilver Astronomy
Forget lenses and silvering – astronomers are turning to whirling dishes of mercury to study the universe.
By Govert Schilling

A Curious Straight Ray
Join the author on his endeavor to observe and sketch the relativistic jet in M87.
By Howard Banich

The Classic Dobsonian Telescope
A relic of the ’70s finally sees the light.
By Jerry Oltion

Reserve a 100-inch Telescope
Follow this link to reserve one of the largest publicly available telescopes in the US.

Telescope Building with John Dobson
Learn how to build a Dobsonian from the man himself.

Betelgeuse? Where did You Go? Read about what is really happening to Betelgeuse as it fades to an all-time low.

The Great Comet of 1970
Fifty years ago, this month a feathery visitor adorned the spring sky.
By Fred Schaaf

Sextans Uraniae
This obscure constellation is swarming with galaxies.
By Sue French