Inside the December 2015 Issue 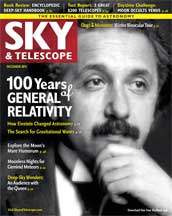 A century after Einstein published his theory of general relativity, this special issue looks back at how the theory revolutionized astronomy. We also look forward to see how astronomy can continue to break new ground: the hoped-for detection of gravitational waves would open a new window on the universe, and with new developments in multiple areas, that detection might be just around the corner. In this issue you'll also find a compare-and-contrast review of three low-cost ($200) entry-level telescopes that give you the most bang for your buck - just in time for holiday gift-giving!

Astronomy & the Future of General Relativity
Albert Einstein published his general theory of relativity 100 years ago this month. Astronomy took half of that time to catch up. Now it's running the show.
By Pedro Ferreira

Gravitational Waves Hit Prime Time
A century after Einstein predicted the existence of weak ripples in spacetime, scientists say we're on the verge of directly detecting these gravitational waves, thereby opening a revolutionary new window on the universe
By Govert Schilling

Beyond the Printed Page: Gravitational Waves (VIDEO)
Learn more about gravitational waves with animations, a 20-minute documentary, and more.

Lunar Librations
Librations and other lunar data for December 2015.

A Moonless Geminid Shower
The nights of December 13th and 14th offer dark skies for frequent meteors.
By Alan MacRobert