Inside the February 2016 Issue 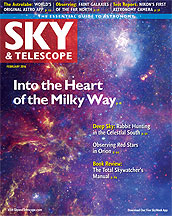 Peering Inside Our Galaxy

In 2011 excitement stirred in the astronomy community when a team of astronomers discovered a dusty object, dubbed G2, flying headlong toward our galaxy's central supermassive black hole. Attention and telescopes alike turned toward G2's close encounter in 2014. But though nothing happened (at least not yet), the non-event turned out to be far from disappointing. February's cover story tells the to-be-continued tale of what we're discovering in our galaxy's heart. In this issue, you'll also find fun observing targets for a winters' night, such as the oft-overlooked galaxies at the celestial pole, red carbon stars within Orion, and Sue French's rabbit hunt in Lepus. And if you're in the mood for something a little different, check out astronomy's oldest app: the magnificent astrolabe.

Into the Heart of the Milky Way
When astronomers tuned in to watch our galaxy's supermassive black hole feed, they found more (an less) than they expected.
By Daryl Haggard & Geoffrey Bower

A Trip to the Northern Frontier
The celestial arctic awaits your arrival.
By Steve Gottlieb

Circumpolar Galaxies
Find a complete list of all 35 galaxies in Steve Gottlieb's article on the celestial arctic.

Finding Your Way
Graduate from our central sky chart to more detailed star atlases and get familiar with your night sky.

Geoff Marcy: The Full Story
Read about the high-profile sexual harassment case that upset the field of astronomy.

Lunar Librations
Librations and other lunar data for February 2016.

Jupiter Blazes in the Night
Look to the morning for the other bright planets.
By Fred Schaaf

Redder Stars in Orion
Betelgeuse is just the teaser. Dig up these very red carbon stars hiding in its vicinity these winter nights.
By Alan MacRobert

A New Angle on Crisium
How did the distinct oval on the Moon's eastern limb come to exist?
By Charles A. Wood