Inside the February 2022 Issue 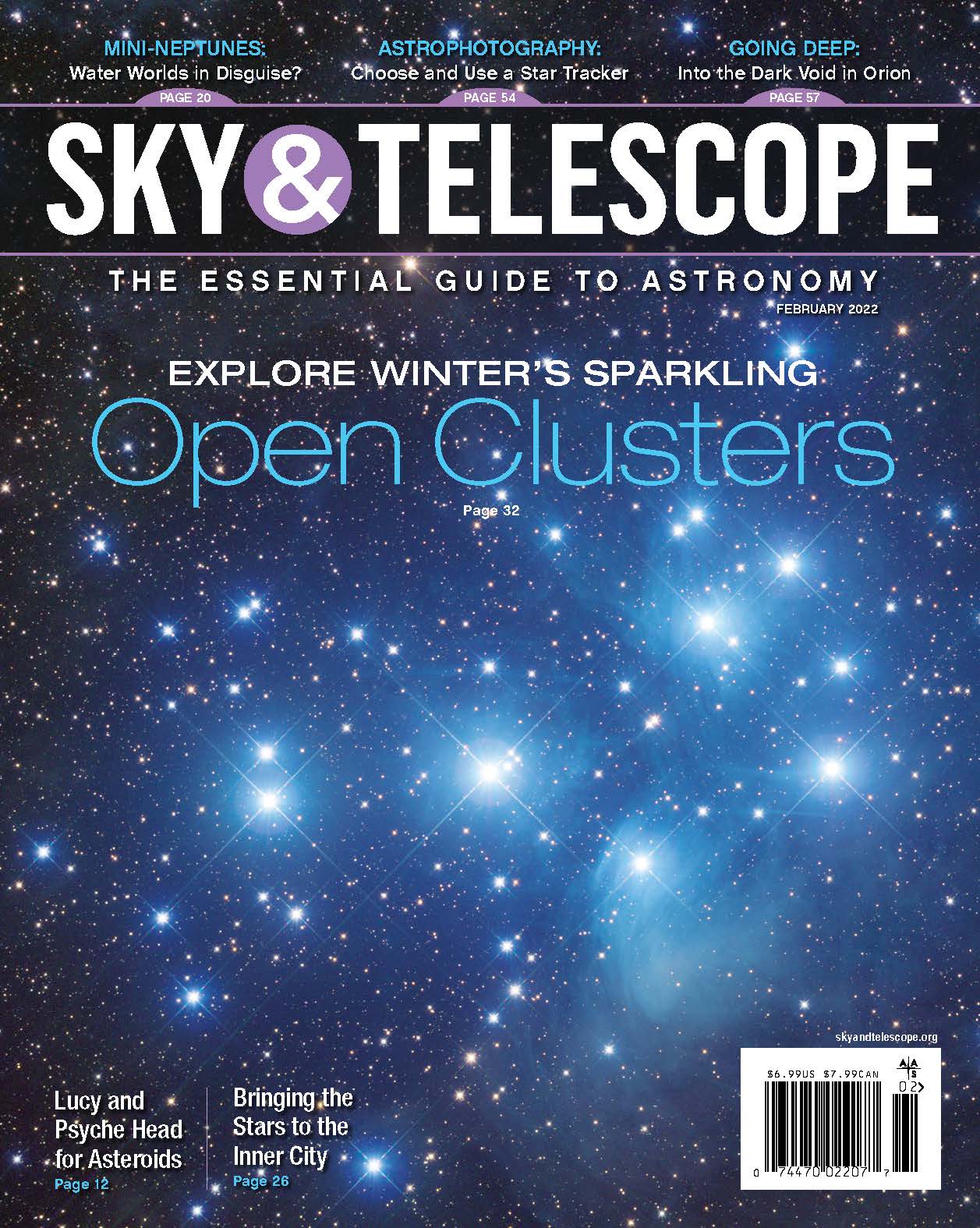 Asteroids, Exoplanets, and Gems in the Winter Sky

In the February 2022 issue of Sky & Telescope, planets aren’t what they seem, and the winter sky holds sparkling gems. While we hunt down glittering open clusters, planetary scientists are sending the Lucy and Psyche missions to suss out the secrets of asteroids across our solar system. Astronomers are also pondering the nature of exoplanets between the size of Earth and Neptune — for which there’s no analog back home. For this kind of exploration to continue, we’ll need new astronomers with new ideas. Living under bright skies and in underprivileged communities, thousands of children have never even seen the Milky Way, let alone been offered astronomy as a potential future career. What happens if the next great astronomer never finds out that astronomy is an option for them? Planetarium director Derrick Pitts is doing his part in Philadelphia to make sure that doesn’t happen.

Planetary scientists are sending robotic emissaries to unmask the secrets of asteroids throughout the solar system.

The Planets That Aren’t What They Seem

Super-Earths and mini-Neptunes abound in the galaxy, but astronomers are still working out what these worlds actually look like.

Reach out to young space enthusiasts while reaching for the stars.

Gems of the Winter Sky

Dedicating multiple nights to a single target can lead to surprising results.

The Next Decade of Astronomy

Read the National Academy of Science’s marching orders for the coming decade in astronomy and astrophysics.

Help NASA scientists follow asteroid occultations so they can predict the shapes and orbits of the future targets of the Lucy mission.

Use the International Occultation Timing Association’s website to find the exact timings of lunar occultations for your area.

The Other Gems of Gemini

The celestial Twins are more than a famous pair of bright stars.

The zodiacal light returns at dusk with a new twist.

Chang’e 5 and the Age of Lunar Lavas

Choosing and Using a Star Tracker

A basic and (relatively) inexpensive accessory can take your astrophotography to the next level.

See what else February's issue has to offer.

I am a subscriber to S&T, and I wanted to check something in the February 2022 issue. I found it almost impossible to get into the digital magazine to check the pages that gave the highlights for the positions of the planets and the Moon during the month. After being made to log in at least 5 times, I decided in frustration to go to an article. That allowed me to enter the magazine and find the pages I wanted to see. I could find no way to access the pages I wanted to see directly.

BTW - I have still not received the promised November 2021 issue that I did not receive when it was first published.