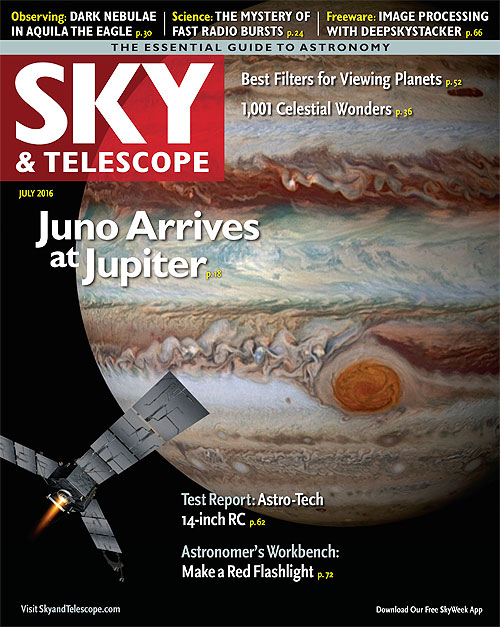 Jupiter greets us with a familiar, friendly face at the telescope at night, but it hides secrets inside — and this July, NASA's Juno spacecraft will arrive at the king of planets to reveal those mysteries from its unique vantage point. Mysterious fast radio bursts have secrets to reveal, too. Once relegated to the scientific fringe, a multitude of discoveries  have put these enigmatic flashes of radio waves back under the spotlight — read the issue to see what we know. And there are no secrets deeper than those of the sky: look into Aquila's absorption nebulae this summer with a guide from Richard P. Wilds. Plus, get tips on the astrophotography software DeepSkyStacker, watch the planets all night long, and take the Pluto challenge.

Revealing Jupiter's Inner Secrets
NASA scientists hope their Juno orbiter will get the "inside story" on our solar system's largest planet.
By Fran Bagenal

The Mystery of Fast Radio Bursts
A decade ago astronomers discovered an ultrabright, ultrabrief flash of radio waves. Now, more than a dozen have been spotted, revealing tantalizing clues to their nature.
By Shannon Hall

Cold, Dark, Deep
Spend the summer with the absorption nebulae of Aquila.
By Richard P. Wilds

A Forgotten Observing Classic
1001 Celestial Wonders, by C.E. Barns deserves a place among the great observing guides of the last two centuries.
By James Mullaney

Combining Photos with DeepSkyStacker
Here's a great freeware program that makes stacking your dep-sky images a snap.
By Jerry Lodriguss

Lunar Librations
Librations and other lunar data for July 2016.

Full House
Every planet in the solar system makes an appearance this month.
By Fred Schaaf

Pluto Has the Last Laugh
For a non-planet Pluto sure shows some amazing planetary traits. Here's how to see Pluto this summer.
By Alan MacRobert

Filters for Enhancing the Planets
These affordable accessories can bring out details when you observe bright planets.
By Thomas Dobbins